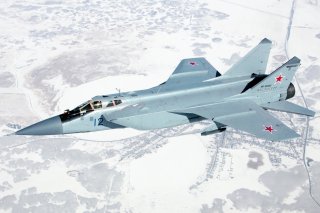 The Russian Defense Ministry’s newspaper Krasnaya Zvezda reported that that as many thirty foreign aircraft had conducted spy missions near its border just within the past week. Eight times Russian fighter jets from the air defense were scrambled to intercept the foreign aircraft though no violations of the state border occurred.

“Thirty spy planes of foreign states conducted air reconnaissance along the borders of the Russian Federation and were tracked by Russian radar systems,” an infographic published in the newspaper claimed according to a report from Tass.

On Saturday, Russian fighter jets from the Eastern Military District were scrambled to intercept a reported U.S. reconnaissance aircraft over the Sea of Japan. Russian radar had reportedly detected the target in international airspace over the neutral waters and before it reached Russian sovereign airspace.

“Sukhoi Su-35S and MiG-31BM [fighter jets] from the Eastern Military District's air defense forces on duty were scrambled to identify and intercept the target in midair,” the Russian Defense Ministry told state media. “After approaching the target, they identified it as an RC-135 strategic reconnaissance aircraft of the U.S. Air Force.”

U.S. Air Force RC-135 Rivet Joint strategic reconnaissance aircraft have been used in the past to study North Korea’s various weapons programs. As The National Interest has previously reported the RC-135S, V and W electronic spy planes are based on antiquated Boeing 707 airliner—but “bring unparalleled snooping capabilities into the fold.”

In addition to their three-person flight crew, Rivet Joint aircraft carry twenty-one to twenty-seven specialists including operators skilled in decryption and linguistic to decode and translate signals, electronic warfare experts (“Ravens”), and systems engineers. These can relay critical information rapidly via radios and a satellite uplink.

The Air Force currently operates 22 RC-135s in the 55th Wing based in Offutt Air Force Base, Nebraska, but it is unclear at this point where the U.S. spy plane may have begun its mission over this past weekend.

The ministry added that the fighter jets escorted the U.S. aircraft at a safe distance, and after the American plane flew away from Russian airspace the Russian fighter jets returned to their home airbase. The Sukhoi Su-35S is an improved version of the Su-27M, a single-seat, twin-engine, supermaneuverable “4++ generation fighter” that has proven itself to be a very capable foe to current U.S. combat aircraft; while the MiG-31 is an air defense interceptor descended from the Cold War Mig-25 Foxbat.

“All the flights of the Russian Aerospace Forces’ [combat aircraft] take place in strict accordance with international airspace rules,” the ministry noted.

The Defense Ministry’s infograpics further alleged that two drones also flew close to the Russian border, but did not specify where or what type of drones were involved.

This recent assertion from Russia Defense Ministry echoes a similar claim made last month that foreign spy planes and reconnaissance drones had flown near Russia’s borders more than thirty times.