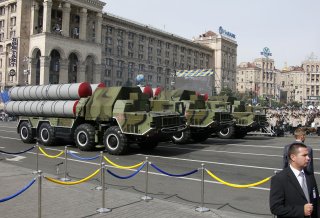 The Russian military claimed on Thursday that it destroyed another Ukrainian S-300 surface-to-air missile (SAM) system. If true, that would further depleting Ukraine’s dwindling ability to contest its airspace one month into the Russian invasion.

"An unmanned aerial vehicle identified the position of a Ukrainian air defense system, which was attacked with a smart artillery shell Krasnopol,” Russia’s defense ministry announced on Thursday, according to Russian state news outlet TASS. “The shell was targeted by a laser-equipped drone.”

According to TASS, the announcement was accompanied by images claiming to show the destruction of the S-300 system. As with most of the battlefield claims being made by both sides of the conflict, Russia’s assertion has not been independently verified by a third party.

The Soviet-era S-300 is among Ukraine’s most advanced air defense tools. Ukraine’s Armed Forces (ZSU) were widely believed to possess around one hundred S-300 batteries before the Russian invasion. The Russian military claimed to have destroyed about forty Ukrainian S-300 systems in the war’s opening stages, potentially crippling the ZSU’s ability to contest Ukrainian airspace.

Russian defense ministry spokesman Maj. Gen.l Igor Konashenkov said in late February that Russian forces secured total air superiority over Ukraine. Konashenkov’s claim was widely disputed at the time, but there are some battlefield indicators to suggest that the invading Russian forces have achieved limited air superiority in large swathes of the country’s airspace.

In a letter addressed to President Joe Biden earlier this month, a bipartisan group of lawmakers said that despite the ZSU’s “heroic and skilled resistance,” the Russian military had in fact achieved air superiority in Ukraine.

“Russia’s advantage in this domain could soon develop into air dominance if the Ukrainians do not receive necessary military aid,” the letter said, according to The Washington Post.

The Biden administration said it is exploring ways to provide Ukraine with additional long-range air defense systems. Slovakia announced earlier in March that it is willing to supply Ukraine with an S-300 system in exchange for assurances that the weapon will be immediately backfilled with a system of similar quality. NATO members Slovakia, Greece, and Bulgaria field the S-300 system.

Reuters reported last week that the White House had “informally raised” with Turkey the possibility of transferring its Russian-made S-400 missile defense systems to Ukraine. The details of Washington’s proposal, including what Turkey was offered in return, remain unclear, though a widely-circulated Wall Street Journal op-ed by former CIA director Paul Kolbe suggested such a deal could pave the way for the sale of U.S. Patriot missile systems to Turkey and a reversal of the country’s suspension from the F-35 program. Ankara shot down the proposal on Wednesday, with Turkish officials calling it “quite unrealistic” and urging Washington to supply Patriot systems and F-35 jet fighters to Turkey “without precondition.”