Russia Cracks Down on Military Deserters as Defections Rise 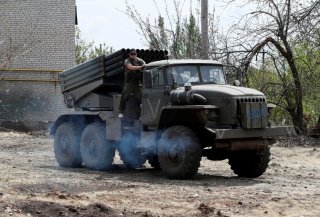 Legislators in the State Duma, the lower house of Russia’s parliament, have proposed a new law that would impose harsh penalties against any Russian soldier who defects from the army or any Russian citizen who volunteers to fight for a foreign army. This step was likely taken in response to the defection of some Russian units in Ukraine to the Ukrainian side.

The new law would forbid Russians from participating “in an armed conflict, hostilities, or other actions with the use of weapons and military equipment on the territory of a foreign state for purposes contrary to the interests of the Russian Federation.” Violators who fight directly against Russian troops or organize a militia could face up to twenty years in prison and fines of more than 2.5 million rubles, or roughly $40,000.

The law’s proposal comes as reports circulate that hundreds of Russian troops have deserted from the Russian military to fight for Ukraine. A unit of former Russian soldiers, the “Freedom of Russia Legion,” has maintained an active presence on social media and has been promoted by the Ukrainian government. In early May, a representative of the group told Ukraine’s Interfax news agency that it had received as many as 300 applications to join per day from Russian soldiers deployed in Ukraine.

The official, a former Russian soldier who remained anonymous due to the possibility of retribution against his family in Russia, observed that the unit also consisted of Belarusians opposed to the rule of Belarusian leader Alexander Lukashenko. The Legion’s logo, a Russian flag with the lowermost red stripe removed and replaced with a white one, is intentionally reminiscent of the white-red-white flag used by the Belarusian opposition movement during the 2020-2021 protest movement.

While defections to Ukraine are probably the exception rather than the norm among Russian deserters, Western observers have noted that low morale has plagued the Russian military in Ukraine since the early days of the invasion. Over the past week, roughly one hundred members of the country’s national guard were discharged after they refused to take part in the invasion, according to the Moscow Times.

In addition to defecting low-level troops, the Kremlin has had to contend with a quiet, yet growing, discontent within the Russian government, and a general failure among Russia’s officer class to seize the initiative in eastern Ukraine—allegedly leading Russian leader Vladimir Putin to shake up his inner circle and fire generals he perceives as underperforming in the conflict.