Russia Has Big Plans for Its May 9th 'Military Parade' 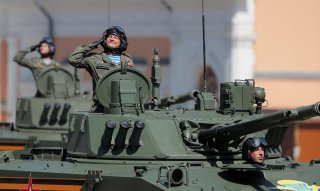 Moscow’s Victory Day parade commemorating the Red Army’s victory over Nazi Germany is among Russia’s most important national holidays. It is also one of the largest annual exhibitions of the Kremlin’s military might, showcasing the latest in Russian defense technology. With only several weeks left until this year’s parade, more details have emerged about the military hardware slated to take part in the celebration.

Over 12,500 troops will march across Moscow’s Red Square on May 9, according to a statement given by Russia’s Defense Minister Sergei Shoigu in late March. The parade will also feature over three hundred “weapon systems,” the Defense Ministry announced. According to an earlier estimate, this year’s roster will consist of 190 vehicles, 53 planes, and 23 helicopters. Shoigu added that the parade’s mechanized column will include 35 types of “new and modernized military hardware,” though that doesn’t necessarily mean that these are all being debuted for the first time. The government confirmed that the column will include Typhoon armored vehicles, Bumerang armored personnel carriers, BMP-2 and BMP-3 infantry fighting vehicles (IFV’s) with newly installed “Berezhok” combat modules, RS-24 Yars intercontinental ballistic missile (ICBM) systems, S-400 air defense units, and the 9K720 Iskander short-range missile system. As staples of Russia’s modern ground forces and missile arsenals, many of these weapons have already appeared at prior Victory Day parades—the S-400, for instance, has become a parade mainstay in recent years. The modernized main battle tank (MBT) category will be represented by the recent T-90M and new T-14 Armata, both of which figured prominently into last year’s Victory Day parade. Also present will be recently-procured variants of the Soviet-era T-72 and T-80 tanks, the T-72BM3M and T-80BVM respectively.

The vaunted parade flypast will be making a return, but with a new twist: for the first time, Su-35S fighter jets will escort a Tu-160 strategic bomber. “We are planning a flight in a traditional formation over Red Square but this year a group of a Tu-160 aircraft escorted by four Su-35 fighters of the Russian Knights aerobatic group has been added,” Alexander Ivashkin, the Aerial Weapons and Tactical Training Chief of the Aircraft Demonstration Center, told Russian media. The 1980s Tu-160 is, in of itself, not a new or particularly cutting-edge entry in Russia’s aircraft roster. Still, one potential reason to make it the centerpiece of a flypast column would be to show off a new air-launched missile or bomb. The hypersonic, nuclear-capable Kh-47M2 Kinzhal ballistic missile, which made its first Victory Day parade debut on a MiG-31 interceptor in 2018, is an obvious candidate here; it was previously revealed that the Russian military was reviewing the possibility of fitting Tu-160 bombers with the Kh-47M2 missile.

This year’s flypast will be opened by Mi-26 helicopters, followed by more military helicopter formations, Tu-95MS  bombers, and Su-34, Su-35S, and Su-24M fighters. A parade staple in prior years, the Su-57 fifth-generation air superiority fighter will be making an appearance toward the end of the flypast event.