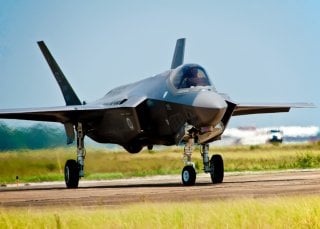 Even as Germany continues to develop its Future Combat Air System (FCAS), a joint program with France and Spain, it appears that German chancellor Olaf Scholz has been convinced that the Luftwaffe would benefit from adopting the Lockheed Martin F-35 Lightning II. The German government has decided in principle that the F-35 is the ideal choice to replace its aging fleet of Panavia Tornado aircraft, which were first introduced four decades ago.

"A fleet of F-35s will provide the Luftwaffe aircraft with much-needed stealth strike capabilities at a time of huge uncertainty and tension in Europe. The presence of another substantial F-35 fleet in Central Europe­ (Finland and Poland currently have aircraft on order) ­will be reassuring for many smaller NATO states that are closer to the ongoing invasion of Ukraine," said Madeline Wild, an associate defense analyst at international data and analytics company GlobalData.

The decision, when it is confirmed, comes just weeks after Scholz announced a massive boost in defense spending following the Russia invasion of Ukraine. Scholz could even call for Germany to increase defense spending above the key NATO commitment of 2 percent of the gross domestic product (GDP). According to government sources, Berlin plans to buy up to thirty-five of the fifth-generation F-35 stealth aircraft.

The decision is especially notable as it follows the monumental budgetary growth in Germany's Bundeswehr (armed forces), which may also placate other NATO members concerned about Germany's prior lack of enthusiasm towards military spending. Historically, Germany has also failed to spend anywhere near the 2 percent of its GDP on defense, as required by NATO—a point noted by former U.S. presidents Barack Obama and Donald Trump.

Now it looks like some NATO countries are stepping up as the Russian bear shows its claws.

In early January, German defense minister Christine Lambrecht told Scholz that the F-35A Lightning II should be seen as the most viable replacement for the Luftwaffe's aging Panavia Tornado. Germany currently operates nearly ninety Tornados that are on track to be phased out by 2030.

Currently, the Tornado is the only German fighter jet capable of carrying U.S. nuclear bombs, stored in Germany in case of a conflict, Reuters reported.

"Germany is likely to acquire the F-35A, which along with the B and C variants, are not certified to carry the U.S.'s B-61 nuclear bombs – despite this capability being a key feature of the Tornados the F-35s will replace," added Wild. "There had been questions over whether this would rule the F-35 out of the competition, however, the Tornados will remain in service until their phasing out begins in 2025. This timeline buys the U.S. time to maintain its German-based nuclear deterrent provided by the B-61 in the face of increasingly fraught and uncertain relations with Russia."

While the F-35 could provide Germany with the most capable jet fighter in service today, it won't be the only combat aircraft operated by the Luftwaffe.

"Also announced by the German government was the decision to continue to develop the Eurofighter aircraft by improving its electronic warfare capabilities," said Wild. "The Tornado replacement program was expected to consist of two platforms, one being the Eurofighter. The decision will be a blow for Boeing, which was the other key contender to replace Germany's Tornados with its F/A-18E/F Super Hornet. The contract would have been a major source of revenue for the U.S. company after a difficult few years."