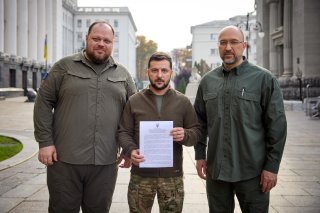 There is no accelerated process for Ukraine’s NATO membership bid, said a senior Russian diplomat on Monday.

“There are no workarounds for [Ukraine] joining NATO,” Russian deputy foreign minister Alexander Grushko said in an interview, according to state news outlet TASS. “Previously, a principled decision was made that [candidates] must undergo several phases, the penultimate one is a membership action plan,” he added. An exception was made for Sweden and Finland, said Grushko, because those two countries are European Union members and have already been integrated into the alliance’s military infrastructure.

Grushko’s remarks were in response to a question about Ukraine’s NATO membership as a possible topic of discussion at the upcoming meeting of NATO foreign affairs ministers in Bucharest. The senior Russian diplomat’s comments suggest that Moscow does not see Ukraine’s accession to the alliance as an imminent possibility. Alexander Venediktov, the deputy secretary of Russia’s Security Council, warned last month that Ukraine’s entry into NATO  “would mean a guaranteed escalation to World War Three,” according to Reuters. Russian president Vladimir Putin said in a November 2021 conference that the Kremlin views not just Ukraine’s NATO membership but the deployment of NATO military assets on Ukrainian territory as a “red line.” The Kremlin sought written guarantees from NATO against the alliance’s eastward expansion last year as part of its ill-fated security demands against the West in the run-up to its invasion of Ukraine.

Ukrainian president Volodymyr Zelenskyy announced in September that Kyiv is pursuing NATO membership on an expedited basis. "De facto, we have already become a NATO ally. We trust each other, we help each other, and we protect each other. This is the Alliance," he said, according to the Kyiv Independent. "Today Ukraine submits an application to make this de jure. [Our accession] would be a formal solidifying of the real state of things we've already achieved." Zelenskyy’s announcement, which drew sharp condemnation from Moscow, came shortly on the heels of Russia’s decision to formalize the annexation of four regions in eastern and southern Ukraine: Zaporizhzhia, Kherson, Donetsk, and Luhansk. NATO secretary general Jens Stoltenberg appeared to throw cold water on Zelenskyy’s emergency request for fast-tracked NATO membership in an interview several days later, reiterating that Ukraine “has the right to choose its own path” but that “any decision on membership has to be taken by consensus, all 30 allies have to agree.”