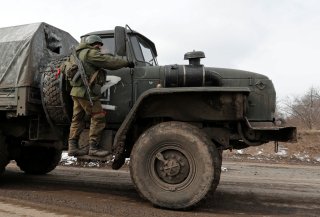 Russia has reportedly asked China for military support and economic assistance amid its invasion of Ukraine, according to U.S. officials. Beyond noting that the request included drones, a U.S. official speaking to CNN did not elaborate on the full scope of the military aid solicited by Russia.

Chinese officials have denied the allegations, accusing Washington of peddling what Beijing describes as misinformation. "The allegations on the matter disseminated by the U.S. are false information," said Chinese Foreign Ministry spokesperson Zhao Lijian at a briefing on Monday, according to Russia’s TASS state-run news outlet.

The Kremlin issued its own denial on Monday. “Russia has the independent capacity to continue the operation,” Kremlin spokesman Dmitry Peskov said in a conference call with reporters. Peskov reportedly rejected the claims of Western leaders and intelligence sources that the Russian campaign is proceeding slower than expected. “As we said, it’s going according to plan and will be completed in full,” he added.

The allegation follows closely on the heels of a recent U.S. intelligence assessment that senior Chinese officials asked their Russian counterparts not to invade Ukraine before the end of the Winter Olympics in Beijing.

Russia and China issued a joint 5,000-word statement earlier in February proclaiming that the friendship between the two countries has “no limits.” The statement included a series of mutual assurances, with Beijing endorsing Russia’s security demands and Moscow reaffirming its stance that “Taiwan is an inalienable part of China.”

Beijing has not explicitly condemned Russia’s invasion of Ukraine, instead urging the warring sides to reach a negotiated settlement. “We need to advance a diplomatic solution of the situation instead of further escalating the situation,” Zhao Lijian said. China has not joined the emerging Western sanctions regime that is intended to cripple Russia’s economy, Beijing has signaled no interest in scaling back its booming trade relationship with Moscow.

U.S. national security adviser Jake Sullivan, who met with top Chinese diplomat Yang Jiechi on Monday, told CNN that Washington will not tolerate any Chinese effort to mitigate the effects of Western sanctions on Russia. "We also are watching closely to see the extent to which China actually does provide any form of support, material support or economic support, to Russia. It is a concern of ours. And we have communicated to Beijing that we will not stand by and allow any country to compensate Russia for its losses from the economic sanctions," Sullivan said.