What the Putin-Xi Olympic Meeting Means for America 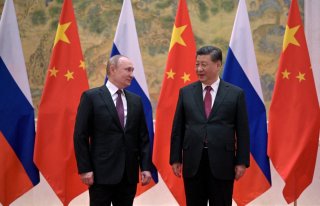 Russian president Vladimir Putin and Chinese leader Xi Jinping met on the first day of the Olympic Games in Beijing to mount an unprecedented show of solidarity against the West.

“Friendship between the two States has no limits,” read a joint statement issued on Friday by Moscow and Beijing. “There are no ‘forbidden’ areas of cooperation, strengthening of bilateral strategic cooperation is neither aimed against third countries nor affected by the changing international environment and circumstantial changes in third countries.”

The statement read in large part as a shot across the bow at Washington, with Moscow and Beijing opposing “further NATO enlargement” and calling on the alliance to “abandon its ideologized cold war approaches…” The opening paragraphs denounced “[c]ertain States' attempts to impose their own ‘democratic standards’ on other countries,” mirroring the points raised in a November 2021 op-ed jointly written for The National Interest by the ambassadors of Russia and China to the United States, Anatoly Antonov and Qin Gang. The statement insisted that both China and Russia have “long-standing traditions of democracy,” adding that “it is only up to the people of the country to decide whether their State is a democratic one.”

The two countries exchanged mutual assurances on a range of regional issues. “The Chinese side is sympathetic to and supports the proposals put forward by the Russian Federation to create long-term legally binding security guarantees in Europe,” read the statement, referencing the security proposals vis-à-vis NATO and Washington published by Russia’s Defense Ministry in December. Moscow, for its part, reaffirmed that “Taiwan is an inalienable part of China” and denounced “any forms of independence of Taiwan.” Russia joined China in expressing serious concern over the AUKUS trilateral defense alliance between Australia, the United States, and the United Kingdom, with the statement positing that the alliance undermines “objectives of security and sustainable development” in the Asia-Pacific region. The two sides claimed that they oppose the “politicization” of ongoing investigations into the origins of the Covid-19 pandemic—a clear show of Russian support against Western accusations that Beijing covered up the outbreak during its crucial early stages.

The Putin-Xi meeting comes amid an ongoing standoff between Russia and the West over Ukraine, with Moscow accused of amassing over 100,000 troops along the country’s eastern border. The White House announced earlier that the Kremlin plans to fabricate a pretext for attacking Ukraine with a “very graphic propaganda video” depicting seeming atrocities against Russian speakers in the country’s east. As of the time of writing, the Biden administration has not provided evidence of the plot; Moscow has denied the allegation.

The joint statement was accompanied by a thirty-year gas deal between Moscow and Beijing that will see the construction of a new pipeline to supply China with 10 billion cubic meters of gas annually. The deal, which will be settled in euros, is set to greatly expand Russia’s already-considerable gas export volume with China. The deal would not let Moscow divert gas otherwise slated for Europe, as Russia’s Chinese and European markets rely on different pipeline networks—it could, however, help Moscow to mitigate the financial damage and volatility from potential Western sanctions.

Just hours before the meeting, State Department spokesman Ned Price warned China that Washington and its allies “have an array of tools” to punish Beijing for helping Moscow skirt potential sanctions. “If Russia thinks that it will be in a position ... to mitigate some of those consequences by a closer relationship with [China], that is not the case. It will actually make the Russian economy in many ways more brittle,” Price added. The Biden administration did not clarify the form that these punitive measures could take.

Dmitri Trenin, director of the Carnegie Moscow Center, assessed the statement as an attempt by Russia and China to pressure the United States and Europe, calling it an “important evolution for the already close [Russo-Chinese] relationship.” However, it also highlights a subtle imbalance in the bilateral relationship: though seemingly reciprocal at first glance, the statement’s litany of mutual assurances belies an underlying asymmetry in China’s favor. Whereas Russia’s support for Chinese positions, whether on AUKUS, Taiwan, or the origins of Covid-19, bears concrete political implications, China’s endorsement of Russia’s goals is vague and abstract. Xi expressed his support for Russia’s December security demands on terms that require no specific commitments from China and are so opaquely phrased that they cannot reasonably incur a Western policy response. Despite securing Russia’s full-throated endorsement for the “One-China principle” regarding Taiwan, Beijing is in no rush to recognize Crimea—absorbed by Russia in 2014 following the events of the Euromaidan revolution in Ukraine—as sovereign Russian territory. The statement condemned “bullying” and “unilateral sanctions” in what appears to be a thinly veiled against Washington, but made no mention of China’s recent unilateral sanctions and coercive diplomacy against Australia and Lithuania.

The Friday joint statement is the clearest expression yet of longstanding efforts by China and Russia to present a united front against the United States and Europe. But as the outlines of an informal Sino-Russian coalition begin to shape, so too do the implicit tensions and imbalances in the relationship.