Is Russia Running Out of Tanks? 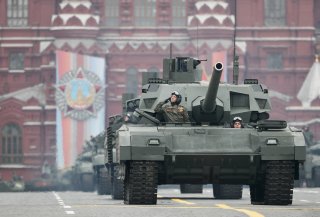 It was almost two years ago that Moscow made a deal with the government of Laos to purchase some thirty World War II vintage T-34 tanks, which would be used in parades, films and displayed in museums. At the time of the deal, people made jokes about how the Russian military actually needed the tanks to supplement its tank force.

The punch line wasn’t far from the truth it seems. Russia could be facing a tank shortage.

According to an open-source intelligence report that appeared on the Russian Lenta website, the Russian Army has 2,685 main battle tanks (MBT) in its active inventory. While that still is a significant number, reportedly only about 1,200 of those tanks—roughly 45 percent—are actually new or upgraded tanks produced in 2000 or after.

This recent analysis was in stark contrast to previous reports from the state-run Sputnik news agency, which said that Russia had almost twelve thousand tanks at its disposal. It has been suggested that as part of a disinformation campaign from the Kremlin to suggest the Russian military was far better equipped.

In fact, Lenta also reported that Moscow has sought to address the lack of available tanks, and created thirty-nine new armored battalions, which were deployed in the western and southern districts, and that the total number of deployed tanks had doubled. However, that suggests that the available tanks may have been far less than the roughly 2,600 currently in service.

Many of the tanks in service are also the Soviet-era T-72 MBT, which was first deployed when Richard Nixon was President of the United States and the F-4 Phantom was America’s primary jet fighter. Given that at least 25,000 T-72s were built—which made it the second-most prolific post–World War II tank produced after the T-54/T-55—it is easy to see how Moscow could have “suggested” that there were still 12,000 tanks in the Russian Army's arsenals.

It has also been noted that the Russian defense industry has increased modernization efforts to ensure that the older T-72B and T-80U tanks have been upgraded to the T-72BA and T-80UE-1 levels respectively.

Over the forty-plus years since its introduction, the T-72 has been steadily upgraded, and even just a year ago it was reported that Russia had about 2,500 of the tanks in active service with another 8,000 in reserve.

If the reports from Lenta are to true, then it would appear that many of those reserve tanks are simply unfit for use in any capacity. Perhaps they’ll be best sent to museums and relegated to parades like the old T-34s.

Russia has a new tank in the wings, the T-14 Armata, which is significantly more advanced than the Cold War tanks. Work on the Armata project began in 2010 when the Russian Ministry of Defense terminated work on “Object-195”—the T-95 program. The entire project was seen to be a huge technological leap from Soviet-era military hardware designs and from the ground up the T-14 is very much distinct from past Soviet/Russian tank platforms.

It is set to begin to enter service next year—but given the costs involved, it would simply be impossible for Russia to modernize its tank force rapidly with the T-14. That helps explain why earlier this year Russia’s Ministry of Defense announced that it would offer the T-14 to foreign customers. That could certainly help subsidize the cost of the T-14, but it still likely won't enable Russia to build up the numbers of tanks.

Perhaps it will have to find a way to work with those T-72s. Failing that there are those T-34s and they seemed to run fine in the recent parades.