Russia Sets Its Eyes on Western Arms Shipments Throughout Ukraine 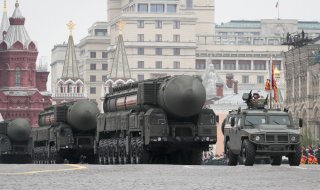 As the fighting rages in Ukraine’s eastern Donbas region, the Russian military is keeping up the pressure on Kyiv with a wide-ranging airstrike and bombing campaign that is partly intended to disrupt the flow of Western arms into the country.

"High-precision Oniks missiles delivered a strike near Odessa on a logistics center at a military airfield through which foreign weapons were delivered. The hangars with Bayraktar TB2 unmanned aerial vehicles, as well as with rockets and munitions received from the US and European countries were destroyed,” Russian Defense Ministry spokesman Igor Konashenkov told reporters on Tuesday, according to state news outlet TASS.

U.S. officials have previously expressed surprise that the Russian military has not done more to target Western arms deliveries into Ukraine, despite repeated claims by top Kremlin officials that Russia views these shipments as “legitimate” military targets.

But that appears to be slowly changing as the West continues to funnel heavy weapons systems to Ukraine’s armed forces in a bid to turn the ongoing battle for the Donbas in Kyiv’s favor. The Russian military announced on April 23 that it eliminated a logistics terminal near Odessa that contained what Konashenkov described as a “large batch of foreign weapons received from the U.S. and European countries.” Within the next few days, Russian forces bombed five railway stations in central and western Ukraine. Ukrainian defense officials said the Russian military is targeting railway junctions in an attempt “to destroy the supply routes of military-technical assistance from partner states.”

It remains unclear why the Russian military did not try to target these key transit points in the earlier stages of the war. Pro-Kremlin political commentators have speculated that the railways in question have not been struck until now in order to protect the financial interests of certain well-connected Russian oligarchs and, by extension, their Ukrainian trading partners.

CNN reported on Tuesday that the Russian military has launched another wave of railway strikes, this time targeting railways in Ukraine’s far-western Lviv region. Local officials said two railway power substations were damaged in the attack, adding that parts of the city are currently without power.