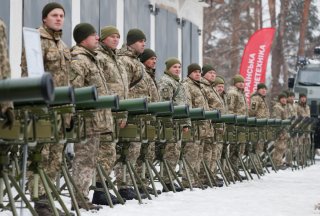 Officials say Washington does not have the means to track U.S. arms shipments to Ukraine.

“We have fidelity for a short time, but when it enters the fog of war, we have almost zero,” a “source briefed on U.S. intelligence” told CNN. “It drops into a big black hole, and you have almost no sense of it at all after a short period of time,” the source added.

The bulk of the U.S. weapons being provided to Ukraine, including Javelin anti-tank missiles and Stinger anti-aircraft missiles, are man-portable systems that are inherently more difficult to track than larger hardware like S-300 surface-to-air missile systems. The Switchblade drones soon making their way to Ukraine are mobile “kamikaze drones” intended for one-time use, which also limits the United States’ ability to track them. “I couldn’t tell you where they are in Ukraine and whether the Ukrainians are using them at this point,” a senior defense official told reporters. “They’re not telling us every round of ammunition they’re firing and who and when. We may never know exactly to what degree they’ve using the Switchblades.”

Because there are no American boots on the ground, U.S. officials are almost entirely reliant on information provided to them by the Ukrainian government. “It’s a war—everything they do and say publicly is designed to help them win the war. Every public statement is an information operation, every interview, every Zelensky appearance broadcast is an information operation,” a source “familiar with western intelligence” told CNN. “It doesn’t mean they’re wrong to do it in any way.”

Trucks containing U.S. arms pallets destined for Ukraine are picked up by Ukrainian servicemen outside the country’s borders, typically in Poland, said Pentagon press secretary John Kirby. “Then it’s up to the Ukrainians to determine where they go and how they’re allocated inside their country,” Kirby said, suggesting that Washington effectively has no means to reliably track these shipments once they exchange hands near the Ukrainian border.

One of the primary risks of blind weapons transfers to Kyiv is the threat of U.S. arms ending up in the hands of paramilitary groups— whether in Ukraine or overseas—that Washington does not wish to arm. Yet, according to administration officials, the White House views failing to adequately and swiftly arm Ukraine as a greater risk. Officials told CNN that Moscow has so far not been able to impose significant costs on U.S. arms transfers to Ukraine, with the Russian military allegedly not making an active effort to target these shipments.

"We're going to keep doing that as much as we can, as fast as we can,” said Kirby, referring to military assistance to Ukraine. “We have not seen any Russian efforts to interdict that flow. And so we're just going to keep doing it," he added. "We constantly look at it every day, monitor it, change it, adapt it as needed."