Russia, Ukraine Claim Heavy Casualties Inflicted on One Another 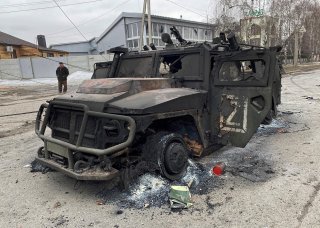 Russian and Ukrainian officials each made claims about the mounting costs of Russia’s invasion earlier this week.

"Over the period of the special operation, 2,396 Ukrainian military infrastructure facilities have been destroyed, including 82 command and communications centers, 119 S-300, Buk-M1 and Osa air defense systems and also 76 radar stations," he said.

But Kiev claims to have inflicted significant losses on the Russians in turn. The Ukrainian military has destroyed  “1,870 units of heavy and light military equipment,” including 39 jet fighters, 40 helicopters, 269 tanks, 945 armored vehicles, 105 artillery systems, 409 vehicles, 60 fuel tanks, and three unmanned aerial vehicles (UAV’s) since February 24, according to a statement issued by Ukraine’s general staff.

The Ukrainian government claims that over 11,000 Russian soldiers have been killed since the start of the invasion; more conservative estimates by U.S. officials put the number closer to 3,000. The Kremlin’s last official statement on Russian personnel losses came on March 2, when Konashenkov acknowledged four hundred ninety-eight Russian soldiers killed while claiming that 2,870 Ukrainian troops were killed in the same period. Kiev has not yet published its own casualty estimates.

Russian forces have made gains in the war’s southern and eastern theaters, capturing the strategic Black Sea coastal city of Kherson last week and encircling the port city of Mariupol, but have been bogged down in the north as the capital city of Kiev prepares for what could be an extended siege with heavy losses on both sides.

The UN has recorded as many as three hundred sixty-four confirmed civilian deaths, including twenty-five children, in Ukraine since the start of the Russian invasion, though the organization concedes that the true numbers are likely to be much higher.