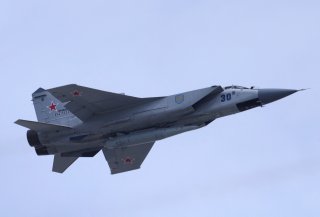 The Russian military fired a volley of hypersonic missiles at the major southwestern port hub of Odesa on Monday, according to Ukrainian officials.

The Ukrainian government reported that a shopping center and warehouse were targeted by a Russian missile strike. Seven missiles were launched in total, according to Ukrainian presidential adviser Oleksiy Arestovych. The missiles were reportedly launched from a Tu-22M3 tactical bomber.

“While seeking strategic targets, obsolete missiles managed to hit an ‘extremely dangerous’ shopping center and a warehouse for consumer goods,” military spokeswoman Natalya Gumenyuk wrote on Facebook, as per Newsweek. Russian forces have previously targeted shopping centers, including one in Kyiv, that they claimed were being used as outposts or firing positions by Ukrainian troops. The Russian military used Kinzhal missiles, likely fielded from a MiG-31K, for the first time in mid-March to target an ammunition depot in western Ukraine.

Maneuverable and capable of flying toward their target at high speeds, hypersonic missiles are believed to be significantly more difficult to track and intercept than their conventional counterparts. The Kh-47M2 Kinzhal, which means “Dagger” in Russian, is a nuclear-capable air-launched hypersonic ballistic missile. Kinzhal was among the six new weapons unveiled by Russian president Vladimir Putin in his 2018 state-of-the-nation address. The Kinzhal missile is reported to fly at speeds of up to Mach 10, or 7672 miles per hour, and has a range of around 3,000 kilometers when launched from a modified MiG-31K fighter jet, allowing it to be used as a precision standoff weapon in Ukraine. The Russian military has so far employed its Kinzhal missiles sparingly, likely a reflection of their limited supply.

As the invading Russian forces shift their priority to the eastern and southern parts of Ukraine, the port hub of Odesa remains one of the war’s major targets. The Russian military does not have the capability to launch a ground assault on Odesa, which is separated from Russian troops by the major southern Ukrainian-held city of Mykolaiv and a slew of smaller coastal locations. Russia’s seizure of Odesa, though a distant prospect at this stage in the conflict, would cut Ukraine off from the Black Sea and leave it a landlocked country. Russian Defense Ministry spokesman Major General Igor Konashenkov announced earlier that a Ukrainian Tarantul-class corvette was destroyed off Odesa’s coast by a Russian airstrike.

The frequent strikes on Odesa are a part of Russia’s efforts to keep up the pressure on more distant parts of Ukraine as it conducts major ground offensives aimed at consolidating control over the eastern Donbas region. The Russian Defense Ministry claimed on Sunday that Russian forces hit nineteen Ukrainian positions, including six weapons depots, with air-launched missiles, according to state news outlet TASS.