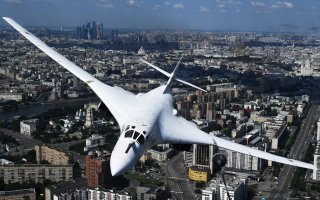 The Russian military claimed on Saturday that it launched a hypersonic Kinzhal missile for the first time in an attack on an ammunition depot in western Ukraine. The announcement was accompanied by a short clip, published by the Russian Defense Ministry’s Twitter account, depicting the alleged strike. It has been widely reported that the Kinzhal missile in question was likely fired from a modified MiG-31K fighter jet.

The Kh-47M2 Kinzhal, which means “Dagger” in Russian, is a nuclear-capable air-launched hypersonic ballistic missile. The Kinzhal missile was among the six new weapons unveiled by Russian president Vladimir Putin during his 2018 state-of-the-nation address. The missiles can be carried by the MiG-31K, a specially modified variant of the Mikoyan MiG-31 Soviet-era interceptor, and by the modernized Tu-22M3M bomber.

The Russian military’s introduction of new weapons was accompanied by an uptick in conventional airstrikes and shelling activity in Ukraine. A large swarm of Russian cruise missiles hit a marine barracks in Mykolaiv on Friday, reportedly killing at least forty Ukrainian military personnel. Capt. Svyatoslav Palamar of the Ukrainian National Guard’s Azov Regiment told CNN that “bombs are falling every ten minutes” in the besieged southeastern port city of Mariupol. On Monday morning, Ukrainian officials said at least eight people died in a Russian strike on a shopping center in the capital city of Kiev.

The recent surge in bombardments and long-range missile strikes comes amid what some are describing as stalled Russian ground offensives near Kiev and around Ukraine’s Black Sea coast. U.S. defense officials and Western military experts have warned that Moscow may turn to increasingly indiscriminate forms of bombing and brutal siege tactics to compensate for the slower-than-expected progress in northern and southern Ukraine.

“If we are not in a stalemate already, we are rapidly approaching one,” a senior NATO intelligence official said on Monday. “And it's quite a thing to say when you consider the disparity in strength when this fight began … you don't get to this point if you don't make a series of mistakes.”