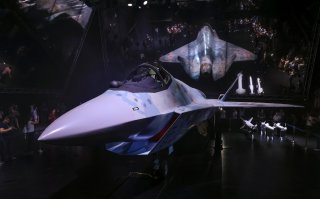 Despite all of the announcements, news reports and massive speculation about Russia’s now unveiled new “Checkmate” stealth fighter, pretty much all there is are unanswered questions.

Certainly to the untrained observer's eye, the external configuration can be looked at and estimated as both stealthy and “F-35” like, yet when it comes to the attributes most likely to define the new aircraft’s prospects for success in warfare, there are mostly just question marks.

Much of the prevailing discussion and speculation about the new aircraft pertains to Russia’s apparent plans to “export” the new fighter to a range of foreign customers potentially looking for an F-35 rival. Does the new Russian jet threaten or diminish the superiority of the U.S.-built F-35? Maybe. Maybe not. It is a single-engine stealthy-looking fighter with a clear resemblance to the U.S. F-35 and, to a lesser degree, the F-22.

A report on the new aircraft from CNN quotes a United Aircraft Corporation (UAC) press release saying the new plane “combines innovative solutions and technologies,” and has “low visibility and high-flight performance.”  The report further adds that the new Checkmate is reported to be unique, in part because it has a “combat radius of 1,500 km, the largest thrust-to-weight ratio, shortened take-off and landing and more than seven tons of combat load.”

As for its potential distribution, the CNN report quotes an official saying that UAE, Argentina, Vietnam, and India are among a growing list of potential customers for the aircraft, which may also certainly have a domestic variant intended solely for use by the Russian Air Force.

Apart from the technical extent to which the new Russian “checkmate” actually mirrors the F-35 when it comes to performance parameters, the prospect of international sales for the new plane presents an interesting dynamic. Could it be possible that, in a manner similar to the growing international community of F-35 countries, Russian-allied nations will collectively formulate a “counter” of sorts to the expansive NATO and beyond partnerships connecting the United States with international military customers? F-35s from different countries can of course all seamlessly connect and share information with one another through a Multi-function Advanced Data Link (MADL), so the prospect of international sales for the “checkmate” would raise clear questions about the extent to which different countries’ “checkmates'' will be able to successfully network time-sensitive combat and targeting data with one another. Is Russia trying to engineer a networked fleet of international “Checkmate” customers sufficient to create a force capable of rivaling NATO?