The Russian Navy Loves Drones (And For Good Reason) 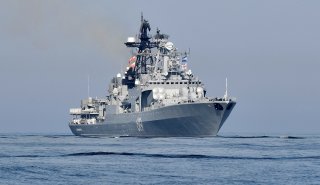 Underwater and aerial drones will be integral to the future of Russian naval modernization, according to a top Russian defense industry executive.

The  CEO of the Krylov State Research Center, Oleg Savchenko, gave an interview to Russian state news outlet TASS. Savchenko said that Russia’s naval modernization plans are proceeding "within the framework of the Armed Forces’ development in general and cooperation by different arms and services, and in the light of the new approaches to forming a unified information space.” According to Savchenko, these  “new approaches” involve the heavy use of combat drones. “On the one hand, future ships may be relieved of some traditional means of covering the situation, while on the other hand robots will become inalienable attributes of ships of a different class. There will be unmanned aerial vehicles and autonomous uninhabited underwater vessels, including those capable of operating in a swarm,” he said.

Savchenko maintains that traditional, manned surface vessels alone cannot ensure Russia’s Navy against categorically new types of threats like hypersonic tactical weapons: “On the one hand, future ships may be relieved of some traditional means of covering the situation, while on the other hand robots will become inalienable attributes of ships of a different class. There will be unmanned aerial vehicles and autonomous uninhabited underwater vessels, including those capable of operating in a swarm.” The Krylov State Research Center is a state-owned, Saint Petersburg-based shipbuilding research institute.

Not unlike its United States, Chinese, and British counterparts, Russia’s military is relentlessly pursuing a wide array of drone projects spread throughout its service branches.

TASS reported earlier that Russian firms have made strides in autonomous swarm drone technologies, with the first serial model to emerge by 2022. One of the Russian defense industry’s latest projects is the Grom (“thunder”) unmanned aerial vehicle (UAV), capable of controlling a swarm of ten smaller Molniya (“lightning”) drones that can be outfitted in either strike or reconnaissance configurations. “Reconnaissance drones are capable of flying back. Strike drones, as in the case with loitering munitions, are kamikaze UAVs. Molniya drones will constantly interact with each other and the carrier drone,” explained the manufacturer, Kronstadt.

Then there is the Okhotnik-B, which is a stealthy, multi-functional loyal wingman drone that is expected to enter service beginning in 2024. Despite previous speculation to the contrary, the Okhotnik-B platform may not be exclusive to Russian aircraft; it was reported earlier that the drone could be compatible with the Project 23900 Ivan Rogov amphibious assault ship, giving weight to Savchenko’s remarks about drone integration being key to Russia’s naval modernization.

Russia’s most anticipated unmanned underwater vehicle is Poseidon, capable of detonating a nuclear warhead thousands of feet below the surface in order to generate a radioactive tsunami that can destroy coastal cities and other littoral assets/infrastructure. Russian military officials believe that Poseidon drones travel too deep, and too fast, to be reliably intercepted by any means currently available to NATO, thus enhancing Russia’s nuclear deterrent. Poseidon doubles as a tactical weapon against U.S. carrier strike groups, according to Russian experts. Up to six such drones will be carried by Russia’s new Belgorod special-purpose submarines.

Russia’s post-Soviet Navy has spent the past several decades reforming into a smaller, but leaner and more advanced, fighting force. A greater focus on drone interoperability could complement and further shape those efforts into the coming years.