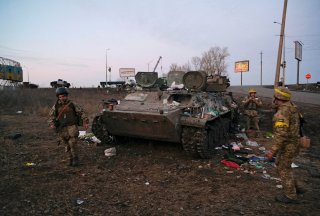 Roughly 150 members of the Russian government have written an open letter to Russian president Vladimir Putin, criticizing his decision to invade Ukraine and warning of “catastrophic consequences” if Russian troops were not returned home.

The letter described the invasion of Ukraine as “an unprecedented atrocity” and warned that Putin was “personally” responsible for the outcome. Putin launched the invasion early on Thursday morning, declaring a “special military operation” to “demilitarize” Ukraine.

The letter’s signatories warned that Putin’s failure to examine public opinion meant that most Russian citizens would not support the war.

“We are convinced that the citizens of Russia did not give [Putin] … a mandate,” it read.

It also warned that Russian activities in Ukraine would lead to “isolation, rising prices and poverty” from international sanctions.

“Hopes for a good life in Russia is crumbling before our eyes,” it read, noting the decline in Russian living standards since the onset of the crisis.

The letter called on Russians themselves to “not … participate in the aggression” and to demonstrate against it.

“Only massive popular condemnation can stop the war,” the letter’s signatories wrote.

Of the public officials to sign the letter, most were members of the municipal governments of Moscow, Saint Petersburg, and other large Russian cities.

The letter’s publication is unusual in Russia, where politics are usually tightly controlled by Putin and his circle of loyalists. Public opposition is rarely discussed in the Russian media. Russian news in the days leading up to the Kremlin’s invasion of Ukraine was dominated by reports of Ukrainian atrocities against the Russian-speaking residents of its eastern Donbas region.

Separate from the letter, many Russian artists and celebrities have come out in opposition to the war, posting pictures and stories on social media voicing their opposition to the Ukrainian invasion. A common trend has been to post a “black square,” similar to those used during the protests over racial justice following the murder of George Floyd in Minneapolis in May 2020.

One of the war’s most high-profile opponents so far has been Ksenia Sobchak, a Russian socialite rumored to be Putin’s goddaughter.

“We, the Russians, will be dealing with the consequences of today for many years to come,” Sobchak wrote, posting the black square.