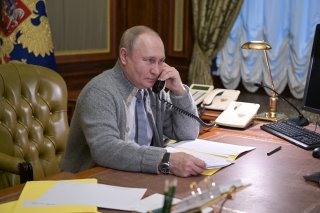 Starting in the second week of January, Russian diplomats and security personnel will travel to the United States and meet with their U.S. counterparts to discuss a series of security guarantees the Kremlin has sought from Washington throughout the escalation of the crisis in Ukraine.

Russian foreign minister Sergey Lavrov indicated that the talks would begin after the Russian Christmas celebrations, which normally take place on January 7 in accordance with the Julian calendar, which the country used prior to 1917.

Throughout the second half of 2021, tens of thousands of Russian troops have deployed on the Ukrainian border. This has increased fear that the Kremlin intends to invade its neighbor and former client state. The Kremlin has denied planning an invasion but has argued that the mobilization was necessary to show the seriousness of its position to the West.

Moscow has insisted that NATO’s eastward expansion, into areas formerly linked to the historic Russian Empire and the Soviet Union, constitutes an aggression on the part of the United States and Western Europe. It has drawn a “red line” at Ukrainian membership in the military alliance, expressing fears that Ukrainian membership in the alliance would remove any buffer between the two sides and could result in American missiles being placed within a short distance of Moscow. In search of a historical parallel, Russia has compared the current situation in Ukraine with the Cuban Missile Crisis of 1962. During the crisis, President John F. Kennedy convinced Soviet premier Nikita Khrushchev to remove nuclear missiles from Cuba despite its affiliation with the USSR.

In order to avoid a conflict, Russia has presented the United States with a list of security proposals, which includes a request that NATO cease all military exercises in eastern Europe and Ukraine. However, this proposal is seen as a non-starter in the West, and Western officials have observed that Kiev has openly sought to join NATO under the post-2014 governments of Petro Poroshenko and Volodymyr Zelensky, the country’s current president.

Russia and Ukraine suffered a falling-out in 2014 after the country’s former president, Viktor Yanukovych, was ousted by a protest movement. In the aftermath of Yanukovych’s resignation, Russia annexed and occupied the Crimean Peninsula and supported a pro-Russian independence movement in Ukraine’s eastern Donbass region. These actions led Kiev to firmly break with Russia and pursue closer ties with the West.