Russia's Lada-Class Submarine Is Making a Comeback. But a Big Problem Remains. 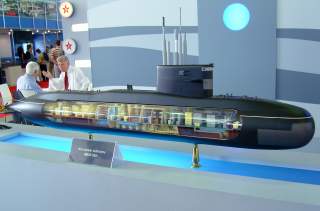 Russia has launched its second Project 677 Lada-class diesel-electric submarine, which has been named Kronshtadt.

The vessel, which is under construction in Saint Petersburg at the Admiralty Shipyards, is of a significantly revised design compared to the first submarine of its class, Saint Petersburg. If the redesigned Project 677 proves to be successful, the Lada class will replace the long-serving Soviet-era Kilo-class design as the backbone of Russia’s conventional submarine capability—and open the door to further export markets down the line.

"The importance of this event is hard to overestimate,” Admiralty Shipyards CEO Alexander Buzakov said at the launch ceremony according to the state-owned TASS news agency. “The submarine began to be built in 2005. There have been some pauses in construction work and in financing, but the launch day has come at last. The delay in construction work allowed for using the experience gained in building and operating the submarine Saint Petersburg. By all parameters this submarine surpasses its predecessor, the Project 636. We are certain that the future of non-nuclear submarine force of the Russian Navy should be pinned on Project 677. There will be a large series."

Russian President Vladimir Putin cited the new Project 677 as one of the highlights of Russia’s current State Armament Program-2027 during a meeting of the Kremlin’s Military-Industrial Commission on September 19. “We started implementing our current program– it will run until 2027 – this year. This program takes into account the current global trends in terms of arms and combat equipment development and the experience gained from using Russian weapons in the Syrian Arab Republic,” Putin said. “As a result of this program our forces should receive new hardware, cutting-edge arms with better combat characteristics than their foreign counterparts. These include the Sarmat missile system, the Su-57 fifth generation fighter, a reinforced tank based on the Armata combat platform, the S-500 air defense system, and the Project 677 submarine.”

While Putin praised the Lada-class program, the Project 677 program did not deliver Russia a vessel with an air independent propulsion (AIP) system as had originally been envisioned. Even as late as last year, it was believed that Russia would build a new Kalina-class submarine in place of the failed Lada-class.

“Three submarines of the Lada class were begun, but after difficulties with the AIP plant only the lead unit, the Sankt Peterburg, was completed in 2010—with conventional diesel-electric propulsion. She now is in the Northern Fleet,” Center for Naval Analyses research scientist Michael Kofman wrote in the U.S. Naval Institute Proceedings journal. “The two unfinished Lada-class sub­marines are scheduled for completion in 2018 and 2019, but the class as a whole has been a failure. It is unclear what Rus­sia ultimately will do with Sankt Peter­burg’s sister ships once finished. Hopes for an AIP submarine now are being placed on the Kalina class, a new design likely to employ AIP, about which little is known publicly.”

However, the Russians appear to have changed course and are proceeding with building additional Lada-class boats. Buzakov noted that the Russian Ministry of Defense is expected to order two additional Lada-class boats next year. These initial vessels will not be equipped with an AIP—since the system developed for Sankt Peterburg proved to be a failure—but future vessels could incorporate such technologies.