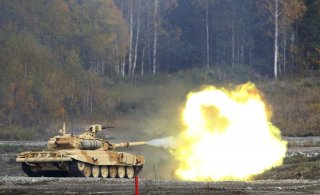 While the first batch of T-14 Aramata main battle tanks (MBTs) is set to finally be deployed to the Russian military later this year, it will be years before the nation's older armored vehicles are retired from service. For this reason, the older tanks could soon be deployed with increased firepower.

This month the commander-in-chief of Russia's ground forces told state media that its tanks could be armed with far larger caliber guns.

The current tanks – T-72B3, T-72B3M, T-80BVM and T90M are armed with 125-millimeter guns and can be used to fire different types of ammunition to successfully cope with their tasks," General of the Army Oleg Salyukov told the government-published daily Rossiyskaya Gazeta according to Tass.

"At the same time it is not ruled out the caliber of tank guns may be increased," Salyukov added during his interview on the occasion of Ground Forces Day, a professional holiday established in 2006.

The tanks Salyukov mentioned are older platforms, but still largely feared ones that have been substantially modernized over the years. The T-72B3 version was introduced in 2010, and while it is part of the family of Soviet MBTs that first entered production in 1971, it was considered a third-generation MBT.

The further upgraded T-72B3M, which was first exhibited at the 2014 Tank Biathlon World Championship, provided the Cold War tank with true 21st century capabilities. The layout of the tank is nearly identical to the original T-72, but it features an advanced fire controls system and new thermal sights. The mobility and combat characteristics have been improved to allow the T-72B3M to compete with some of the most advanced tanks in the world today.

Likewise, the T-80BVM is a modernized version of the T-80, and this newest model was first publically revealed only in 2017. Originally, the Russian military had planned to retire its T-80 series tanks by 2015, but instead, the first batch of 31 of the tanks was upgraded to the T-80BVM standard and revealed during a military parade in 2018. Among the improvements is slightly improved Relikt explosive reactive armor protection. However, due to high operational costs, many of the T-80BVM are kept in reserve, according to Military-Today.

The T-80BVM are unlikely to be retired anytime soon as the Cold War-era design works quite well in cold conditions! The turbine engine used in the tanks, which is more expensive to operate and maintain, has the benefit of functioning better in the northern parts of Russia where the temperatures can be very low. While Russian diesel tanks can take around 45 minutes to start at -30 degrees Celsius, gas turbine tanks can be up and running in around one minute. T-80s are also said to be more comfortable and warmer for the crew in such climates than other tanks.

The T-90M, which remains arguably Russia's most advanced front-line tank, is a modernized version of a vehicle that first entered service in 1993. The Russian Army received the first new T-90M tanks as part of a batch of 400 last year.

Clearly, the Russian military has been continuing to keep the tanks up and running with the latest advances, and based on Salyukov's latest statements the next round of upgrades could see these tanks have a bit more hitting power.