Russia's Only Aircraft Carrier Won't Be Ready for Service Until 2022 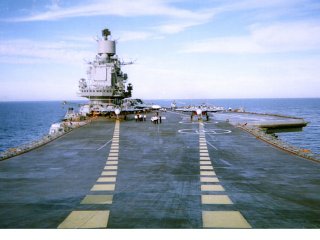 It is not an overstatement to suggest that Moscow doesn't have a good track record with aircraft carriers. During the Soviet era, there were multiple attempts to build a carrier but none were "true" aircraft carriers comparable to those in service with the United States Navy. The Soviet Navy instead focused on its Kiev-class of aircraft cruisers, and four of those warships were built – and one is still in service with the Indian Navy as the INS Vikramaditya.

At the tail end of the Cold War, the Soviet Union began construction on two modern Admiral ­­­Kuznetsov-class aircraft cruisers. While one was eventually sold by Ukraine to China and completed as the Liaoning, the lead vessel entered service with the Russian Navy as its flagship.

However, it hasn't been smooth sailing for the Admiral Flota Sovetskogo Soyuza Kuznetsov. Originally named the Leonid Brezhnev, the carrier entered service with the Russian Navy in 1995. While under refit last December, a major fire broke out on the vessel during a refit at the port of Murmansk. The cause of the fire was investigated and it was determined it could have started due to a violation of safety rules during welding work on the warship. The fire reportedly engulfed an area of 500 square meters. Two people were killed and 14 more suffered injuries.

The extensiveness of the damage remains unclear, but sources in Russia have said that the fire damaged some of the ship's electric power cables. Despite the damage, efforts have continued to repair the ship. Unlike the U.S. Navy's Bonhomme Richard, which was also damaged by a fire while undergoing a refit and will not return to service, Moscow has continued to ensure Admiral Kuznetsov will head to sea again as the Russian Navy's flagship.

However, it could be years, possibly several, before the ship returns to full duty. It will likely spend all of next year undergoing repairs before it again sails in open waters.

"Next summer, the Admiral Kuznetsov will be docked again and will be then set (sail) for sea trials, namely in 2022," a source at the national shipbuilding corporation told Tass last Friday.

Russia's flagship displaces 58,000 tons, and it has a length of 304.5 meters. Unlike the U.S. Navy's carriers, it does not utilize a catapult to launch aircraft and instead is equipped with a ski-jump ramp. The Russian warship has two aircraft elevators, and its air task force can consist of 24-26 fighter jets and 12 helicopters.

It is a conventionally powered ship, and has a full-speed capacity of 200,000 horsepower and can reach a speed of up to 30 knots. Apart from its air wing, the Admiral Kuznetsov is also armed with anti-ship and air defense missile systems. It has a crew of 1,300 while the air group's personnel numbers 660 men.

It was estimated that the cost to repair damage from the December 12, 2019, fire may be 95 billion rubles (US$1.5 billion). While less than the estimated $3.5 billion it would have taken to repair Bonhomme Richard, it must be asked why Moscow would invest so much in a warship that is far from new and lacks the capabilities of western carriers?