The Burning of the USS Bonhomme Richard Could Mean Problems for the U.S. Navy 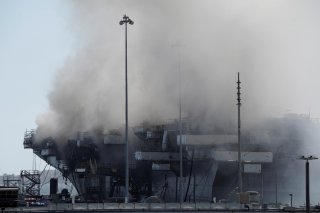 On July 13, as Secretary of State Mike Pompeo was issuing a press statement warning China that “the world will not allow Beijing to treat the South China Sea as its maritime empire,” the USS Bonhomme Richard—one of the U.S. Navy’s premier first responders to China’s growing naval presence—had been on fire for twenty-four hours. The amphibious warship, commissioned in 1998 and built for an estimated $750 million, had been burning since the previous day when a small blaze broke out in the lower armored vehicle storage area in the aft portion of the vessel. Within minutes that fire had spread into surrounding compartments. The “BHR,” as it is called, does not have the public profile of one of the Navy’s eleven nuclear-powered aircraft carriers but it is viewed as one of the service's premier warfighting vessels and named for John Paul Jones’s legendary three-master. The ship’s mission is to “embark, deploy and land” U.S. Marines in amphibious assault operations—supported by helicopters and, most recently, by F35B aircraft launched from its eight-hundred-foot deck. At the time of the fire, the USS Bonhomme Richard was undergoing maintenance, which was nearly completed, and was berthed at Pier 2 in San Diego.

The USS Bonhomme Richard’s sailors responded to the fire when they noticed smoke billowing through the lower deck. But the initial blaze could not be controlled, as there were only some 160 sailors on board and the ship’s internal fire system had been deactivated during the maintenance period. The fire grew in intensity into that Sunday afternoon, spewing clouds of asphalt, plastic, paint and other toxic material into the air over San Diego and prompting Navy officials to call on the San Diego Federal Fire Department for help. Shortly thereafter, an explosion ripped through the ship, knocking sailors to the ground, hurling debris across the pier and forcing firefighters into a temporary retreat. A call went out to nearby San Diego city fire stations for assistance—a “desperate measure,” according to a senior retired U.S. Navy officer with whom I spoke at the time. “Well, God bless the San Diego fire department,” he added, “but they don't have a clue how to fight a ship fire. They're just going to pour water onto the thing.”

By Monday morning, according to published reports, more than two hundred San Diego firefighters and fourteen local fire engines were on the scene—in addition to four hundred sailors from sixteen other ships—but fire officials feared the ship's superstructure would collapse, killing or trapping those fighting the fire inside the ship. Smoke billowed through the ship, where temperatures reached one thousand degrees, melting large portions of the vessel's structure. The fire was so intense that two nearby cruisers pulled off the pier, with firefighters calling on three squadrons of water-dropping helicopters and a fleet of fireboats for assistance. In all, fifteen hundred buckets of water were dropped on the ship by MH-60 Seahawk helicopters, mostly to cool the flight deck so that firefighters could board the ship. A squad of tugboats, meanwhile, poured water into the ship’s hanger bay. By Monday afternoon, the ship had taken on so much water that it had begun to list to port, and officials feared it would sink. The ship was eventually righted but then began to list to its starboard side, before being once again righted.

By Tuesday morning, with the fire still spreading, firefighters were involved in three battles: to control the flames, to keep the ship’s structure from collapsing and to “dewater” the ship’s interior to keep the vessel from sinking. The fire control efforts were nothing less than heroic: initial fears that the fire would reach the ship’s lower decks, where tanks held one million gallons of fuel, did not materialize. It took four days to control the fire so that by Thursday morning, inspectors could get into the inaccessible compartments to search for remaining hotspots. What they found was a gutted interior. No lives were lost in the fire, but fifty-nine people were treated for smoke inhalation and heat exhaustion and, as recent reports confirm, some of the firefighters (forced to share protective firefighting gear), have tested positive for the coronavirus. Navy officials speculated that the USS Bonhomme Richard would be a total loss and need to be replaced, to the tune of some $4 billion.

“This should have been completely preventable because the Navy is supposed to have good practices for stowage aboard ships,” Bryan Clark, a senior fellow at the Hudson Institute, told the Wall Street Journal. “If a fire breaks out, the Navy should be able to fight it immediately.” “Commander Salamander”—the U.S. Navy’s most widely read commenter on all things afloat, was even more enraged—airing his personal judgment on his widely read and often controversial online blog: “We got lucky: we got lucky the ship was not full of Sailors and so far there have been no deaths. We are lucky that there were no weapons on-board. We are lucky this was not a nuclear-powered ship. We are lucky . . . BHR was not sunk. [The Pacific Fleet] has had a bad run the last three years, this is just another black eye.” Commander Salamander also commented on the Navy’s public response, which he described as “slow and clunky.” Put simply, the loss of the USS Bonhomme Richard not only a blow to the Navy’s Pacific Fleet, it was a blow to the U.S. Navy’s prestige.

The fire shook “Big Navy,” the service’s Washington, DC-based senior commanders, who were already staggered by a series of public scandals, including the unexpected retirement of widely respected Admiral Bill Moran, the firing of Navy Secretary Richard Spencer, the relief of USS Theodore Roosevelt Captain Brett Crozier and the resignation of Acting Navy Secretary Thomas Modly. Worse yet, according to senior civilian Pentagon officials, the Navy was still reeling from Defense Secretary Mark Esper’s under-the-radar announcement that he was taking future naval shipbuilding planning out of their hands and dividing it among three different groups—budget planners in his own office, force planners on the Pentagon's joint staff and Navy experts at the Hudson Institute. The Esper move was as unprecedented a vote of "no confidence" in the Navy as any in its history. Now, not only was the Navy’s thirty-year shipbuilding plan (its Integrated Naval Force Structure Assessment) being rethought “from the ground up,” a potential cornerstone of that project, a high-end amphibious vessel that included a suite of F-35Bs (and thereby recast as a “lightning carrier”), was a smoking hulk.

“This is not tinkering at the margins,” as the senior civilian Pentagon official with whom I spoke said in describing Esper’s decision to circumvent the Navy’s shipbuilding planning. “The entire Navy budget is being reshaped, and for good reason. Big Navy assumed that they’d have twelve aircraft carriers by 2050, but that’s thirty years away. Not only are these big-ticket items, it’s not at all clear that they’re the kind of ships we’re going to need in any confrontation with China. If we can be faster and just as lethal at less cost, then why wouldn’t we do that?" Another Pentagon official put the Esper decision in context: “The cost of one aircraft carrier,” as he noted, “is nearly equal to the entire SOCOM [Special Operations Command] budget. It’s bullshit. What a waste of money. Great power competition will play out in the unconventional and irregular realm. Deterrence is important, but we don’t need new fleets.”

The burning of the USS Bonhomme Richard is significant. It is not simply that the fire gave a black eye to the U.S. Pacific Fleet, it has solidified the new thinking about the Navy budget that has swept through the Pentagon’s upper reaches—and has recast the way that the Office of the Secretary of Defense, the Joint Staff and the Hudson Institute shape the Navy’s future. While Big Navy argues for the deterrence value of nuclear-powered aircraft carriers, which can sustain themselves longer than an amphibious ship like the USS Bonhomme Richard, they are harder to maintain, take longer to deploy and do little good if their ship’s complement is infected with the coronavirus. Then too, as those rising voices in favor of a more mobile fleet point out, the U.S. Navy is undermanned and overbuilt: there are simply too many ships and too few sailors. Navy planners are facing a tyranny of numbers: a Nimitz class aircraft carrier is manned by six thousand sailors, while a Wasp-class amphibious carrier (like the USS Bonhomme Richard) needs twelve hundred. The most recent Nimitz class carrier, the Gerald Ford, cost $12.8 billion, while the USS Tripoli (commissioned even as the BHR was burning), cost one-third as much. In an era of flat budgets, the Navy is being forced to choose between funding operations, maintenance and personnel—or funding more ships. Which is why quietly, but inevitably, Navy planners are mulling a fleet of fewer Nimitz class carriers (perhaps no more than seven in all), while adding more BHR-like amphibious ships. The irony is clear: even as the final embers of the USS Bonhomme Richard were being extinguished, it was the bent, melted and ungainly hulk of the Navy’s budget that was being rethought.