The U.S. Navy Has Sent An Aircraft Carrier To Train with India 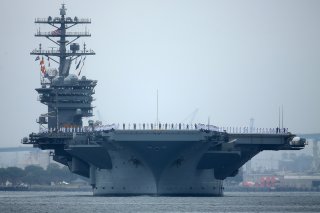 This week the U.S. Navy’s USS Nimitz Carrier Strike Group (CSG) began cooperative exercises with the Indian Navy in the Indian Ocean, highlighting one of the close partnerships that Washington has with nations around the globe while it also reaffirms the U.S. Navy’s commitment to support a free and open Indo-Pacific region.

This latest exercise with a partner navy follows dual-carrier operations between the USS Nimitz and USS Ronald Regan CSGs in the South China Sea amid continued U.S.-China tensions.

Spotlight on the Indian Ocean

The joint U.S.-Indian exercises also come as there has remained a tense standoff between the Chinese and Indian militaries in the mountainous region near the Ladakh valley at the Line of Actual Control (LAC), the poorly demarcated border between the two nuclear powers. As a result of those tensions between Beijing and New Delhi, the latter has taken greater notice of Chinese naval activity in the Indian Ocean, which has steadily increased since Chinese submarines visited Sri Lanka in 2014.

In recent weeks, Indian officials have indicated that the nation could move forward with several projects to bolster its aging navy.

The cooperative exercises with the U.S. Navy could be seen as another signal to Beijing that Chinese aggression in the Indian Ocean will not be tolerated.

Such joint operations have been designed to maximize training and interoperability, including air defenses between partners, while such naval engagements were further developed to improve cooperation between the partners that could counter threats at sea from piracy to violent extremism. Most importantly these exercises also have been seen to present opportunities to build upon the pre-existing strong relations between Washington and New Delhi, which allowed sailors from both countries to learn from the other.

“It was a privilege to operate with the Indian Navy,” said Rear Adm. Jim Kirk, commander, Nimitz Carrier Strike Group. “RADM Vatsayan, Flag Officer Commanding Eastern Fleet, leads a powerful and highly skilled fleet. The opportunity to have the Nimitz Carrier Strike Group join with his fleet for a series of exercises improved our interoperability and is a testimony to the flexibility of both our Navies.”

CSG-11 previously took part in joint operations with the Indian Navy in the Bay of Bengal during Exercise Malabar in 2017. The July 2017 exercises were notable for including press photos that showed Indian Navy MiG-29K Fulcrum fighter jets flying over CVN 58. The Russian all-weather carrier-based multi-role fighter was developed by the Russian Mikoyan design bureau and has been described as a 4++ generation aircraft. Such moments highlighted how there are always shifting currents when it comes to military partnerships.