Is Russia's S-550 Missile System Coming to Belarus and Serbia? 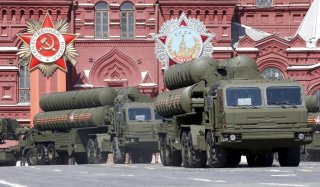 Russia’s first serial S-550 system has entered service, according to a Russian state media report. "The S-550 air defense system has successfully completed state trials. The first S-550 brigade has entered combat duty," a source close to Russia’s Defense Ministry told the news outlet TASS. The source described the weapon as "an absolutely new and unrivaled mobile system of strategic missile defense," adding that it is capable of "hitting spacecraft, ballistic missile reentry vehicles and hypersonic targets at altitudes of tens of thousands of kilometers." The source did specify where the S-550 regiment in question has been stationed. TASS noted that it was not able to corroborate its source’s information.

The news appears to be a stark deviation from previous projections, with an earlier TASS article reporting that the system is projected to be delivered by 2025 as part of Russia’s 2027 armament cycle.

Defense Minister Sergei Shoigu revealed the existence of the S-550 at a Defense Ministry conference on November 9. “The head of state placed special emphasis on the importance of advancing the development of domestic air and missile defense systems, and the supply of S-350, S-500, and S-550 to the Armed Forces,” Shoigu said.

The S-550 is a variant of Russia’s long-anticipated S-500 “Triumfator-M” next-generation system missile defense system. Whereas the S-500 is principally intended as a tool against advanced cruise missiles, unmanned aerial vehicles (UAVs), and stealth aircraft like the upcoming B-21 Raider heavy bomber and F-22 Raptor, the S-550 is reportedly specialized to counter intercontinental ballistic missiles (ICBMs) and space-based threats. It was reported in October that the first S-500 regiment had entered service in the Moscow region. The Kremlin has not publicly confirmed the system’s specifications or any plans related to its future deployments.

Sergei Chemezov, CEO of the Russian defense-industrial giant Rostec, told reporters that the S-550 boasts extended target detection and missile ranges; it remains unclear if Chemezov was referring to the S-550’s performance gains versus the S-500 or the older S-400 “Triumf.” Russian military sources anonymously clarified last month that the S-550 is not intended to directly compete with the S-500. “The S-550 system will not replace [the] S-500, because it is not more advanced than its predecessor. In fact, it is a slightly lighter version. The new system’s combat goals will differ from those of [the S-500] Prometei,” a source previously told Russian media. Instead, both the S-500 and S-550 are intended to reinforce Russia’s echeloned air/missile defense network against the latest and most sophisticated threats.

Reports of the S-550’s introduction come amid concerns that Moscow is reviewing plans to proliferate its flagship missile systems to allied countries, possibly including Belarus and Serbia, as a retaliatory measure if upcoming diplomatic talks with Washington and NATO, slated for early January, do not yield the sweeping security guarantees the Kremlin is seeking.