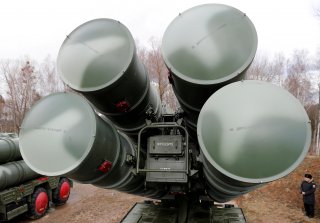 “Beyond a doubt, once we deliver this system to our troops, India will be the first on the list, if it expresses its desire to buy these advanced armaments,” Russian deputy prime minister Yury Borisov told news outlet RBC earlier this week. Borisov’s willingness to comment on the record about India’s willingness to import the S-500 could suggest that such discussions are already ongoing between Moscow and New Delhi. Russian president Vladimir Putin met with his Indian counterpart Narendra Modi last week to ink a major arms deal involving the joint production of over six hundred thousand Kalashnikov AK-203 assault rifles on Indian soil. Russian officials added that shipments of the S-400 missile defense system—purchased by India as part of a 2018 defense contract—will proceed according to schedule, despite the looming threat of retaliatory U.S. sanctions against New Delhi under the  “Countering America’s Adversaries Through Sanctions Act” (CAATSA). “I mean innovations and air defense systems where we are among the world leaders. This also refers to the future Prometei [S-500],” said Borisov, adding that Russia’s exportable missile systems “have proven their efficiency in practice on many occasions, including all the latest military conflicts.”

Borisov went on to cast doubt on the Stockholm International Peace Research Institute’s recent conclusion that major Russian arms manufacturers saw their global market share dwindle for the third consecutive year. In this context, I do not agree with their conclusions because they fail to take into account many things that I know about. Secondly, our statistical data suggest that we have a stable book of long-term contracts topping $50 billion while $13-15 billion has been our annual export figure lately. Our leading importers have long-term contracts with us,” Borisov said.

The S-500 “Triumfator-M” is a next-generation missile defense system that reportedly features across-the-board performance improvements over Russia's current S-400 platform. Though the Kremlin has not yet officially confirmed the system’s specifications, the S-500 is widely believed to boast an effective operating range of six hundred kilometers against ballistic missile threats and five hundred kilometers for area defense engagements. Russian military experts believe that the Triumfator-M can reliably counter hypersonic cruise missiles, unmanned aerial vehicles and advanced stealth aircraft like the U.S. B-21 Raider heavy bomber.

The S-500 is expected to serve alongside the S-400 and older systems including the S-300 and Pantsir S1, enhancing Russia’s echeloned air/missile defense networks with new tools against the latest and most sophisticated threats. It was revealed earlier in November by Russian defense minister Sergei Shoigu that the S-500 will be accompanied by the upcoming S-550, a Prometheus variant that is reportedly specialized to counter intercontinental ballistic missiles and space-based weapons.