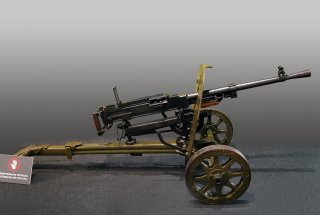 At the start of the Second World War the Soviet Union's Red Army was using a variety of antiquated weapons. The main battle rifle was an updated version of the Mosin-Nagant, which had been introduced in 1891 and apart from reducing the length by a few inches virtually nothing else was actually improved. The standard heavy machine gun was the largely obsolete Maxim M1910, a water-cooled machine gun that was essentially the same version used in the First World War.

By contrast, the British Army had largely replaced its Vickers machine guns with the Bren Gun, while the German Army relegated the aging MG08 to rear duty service in favor of the general purpose MG-34. The Soviets had introduced a new light machine gun, the DP-28, which provided mobility but in the early part of the war the Red Army still lacked a reliable replacement for the M1910. The key word being "reliable!"

In 1939, the Soviets did begin production on the new DS-39 machine gun, which was developed by noted gun designer Vasily Degtyaryov. However, unlike his other designs it had numerous issues, the worst of which was that it was prone to jamming. Shortly after the German invasion in June 1941 factories resorted to producing the older and heavier M1910 again.

One of the biggest issues with the M1910 was that unlike other machine guns of the era that could be used in a variety of configurations, the aging Maxim worked well only when mounted on the heavy wheeled Sokolov mount. That provided a semblance of mobility that was lacking with the British Vickers or German MG08 but still made it hard to be used in a quick-moving attack. About the only good thing to say about the wheeled mount was that in the early days of the German invasion it allowed the guns to retreat quickly with the Red Army!

The development of a new machine gun began in 1942 and was lead by P.M. Goryunov at the Kovrov Machinegun plant. In less than a year the Stankovyy pulemet sistemi Goryunova, meaning "Mounted machinegun, Goryunov design," – also known as the SG-43 Goryunov – was produced. It was technically a medium machine gun but could be used in a number of configurations.

It was chambered for the same 7.62x54mmR cartridge that was used in the Mosin-Nagant and M1910 machine gun – as well as the DP-28 and other Red Army weapons. It was a belt-fed, gas-operated machine gun that utilized a titling breechblock and a rather complex feed system, but it was able to maintain a rate of fire of around 700 rounds per minute. More importantly, it was air-cooled and featured a massively dense barrel that was chromium-plated to allow it to withstand continuous fire. As with the German MG-34 or British Bren Gun the barrel could also be swapped out if it began to overheat.

However, the SG-34 was still a heavy weapon but a new wheeled mount was designed by Degtyarev, which could be used in both infantry and air-aircraft configurations. The early mounts were equipped with a steel shield – similar to the one used in the M1910 Sokolov mount – while it was later omitted to save on weight and steel, plus there is the fact that it offered only minimal protection to the gun crew.

After World War II the SG-43, in various configurations, was exported to Soviet allies and it was used in the Korean War by the North Korean and Communist Chinese forces and later it was produced under license by Egypt where the weapon was used in various conflicts against Israel. As stocks had been exported to Afghanistan prior to the Soviet invasion, many were also used against the Soviet Red Army in its 1979 invasion.

The weapon was eventually replaced by the Kalashnikov-designed PK/PKM series of general-purpose machine guns in the 1960s.