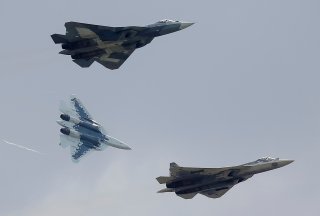 The combat capabilities of Russia’s Su-57 fifth-generation fighter have been compared to the United States Air Force’s F-22 Raptor. The Russian aircraft’s speed and armament could allow it to respond quickly to potential threats—and if necessary back out just as quickly from fights it cannot win. But now the Su-57 could have another advantage: a remotely piloted mode that could enable the advanced fighter to be operated safely away from potentially hostile skies.

“Indeed, we are considering the options of the remotely piloted mode on many platforms and, of course, such work is being carried out on the Su-57,” Yuri Slyusar, CEO of the United Aircraft Corporation (UAC) told the Zvezda TV Channel on Monday as reported by state media.

The fifth-generation multi-role fighter was designed by UAC as an aerial platform to destroy all types of air, ground and naval targets. Much like the American-built F-22 Raptor or F-35 Joint Strike Fighter, the Su-57 fighter jet features stealth technology—in this case from the broad use of composite materials, while the aircraft is also capable of supersonic cruising speed and is equipped with an advanced onboard radio-electronic system that includes a powerful onboard computer. That computer has been described as a second pilot, but how it might be used remotely is still unclear. Another innovation is the armament that is placed inside the airframe’s fuselage.

The Su-57 also features a radar system that is spread across its body. Russia’s aircraft is the only fighter in the world to feature this “Directed Infrared Countermeasure System” (DIRCM), which also includes a missile-spoofing turret that was designed to protect the fighter from infrared-guided missiles. However, analysts have questioned exactly how effective the system could be for a fighter as it has primarily only been used on transports and helicopters and never has been placed on the ventral side of an aircraft.

Since the Su-57 first took to the skies in January 2010, it has been shown to combine the functions of an attack plane and a fighter jet while the use of the composite materials and its innovative technologies along with aerodynamic configuration has ensured that it would have a low level of radar and infrared signature. In theory, this should make for quite the adversary in the skies—more so given that the plane’s armament could include hypersonic missiles.

However, in practice, the Su-57 has been plagued with problems during its development and by some accounts, the plane underperformed when it was deployed to Syria for field testing. In fact, last month Russian military chief of the general staff Valery Gerasimov only confirmed that the aircraft had even been deployed to Syria and said little about its performance, so that is hardly a rousing endorsement of the aircraft’s capabilities.

The bigger problem is that Russia likely won’t receive the Su-57 in any significant numbers—at least not any time soon. Perhaps a total of four will be handed over to the Russian military this year. That is a far cry short of the seventy-six-plane order and at just four planes per year (if Russia can even maintain that many), it could take three to four years to form a single squadron. That begs the question as to why a remote control option would even be necessary—it certainly isn’t an issue of shortage of pilots as much as fewer than required aircraft at this point.