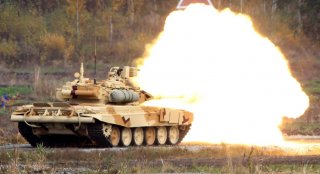 It does not seem very clear, certainly when looked at with any understanding of the anticipated arrival of a v4 variant of the U.S. Army’s M1 Abrams tank.

Russian news reports from TASS, which said earlier this year that upgraded T-90M “Proryv” (Breakthrough) tanks had arrived with the Russian Army, claim the new variant introduces a host of unprecedented advantages. These include a 125m cannon that allows new high-powered munitions and missiles able to hit enemy tanks at distances up to 5km, TASS reports.

The T-90 is also reported by TASS to incorporate a new turret and “anti-slip” armor features similar to what’s used on the T-14 Armata tank.  The tank also reportedly incorporates a new, more powerful engine and is outfitted with a new multi-channel sighting system enabling day and nighttime attack options.

While these reported attributes of the T-90 are certainly likely to command attention at the Pentagon, the existence of a new “sighting system” might generate the largest amount of concern. The range and accuracy with which targeting sensors can find and attack enemy targets, such as tanks, would bear prominently upon its prospects for combat success.  Should one tank see another before it is itself detected, then combat capability differences are in many instances much less relevant as an attacker would not need to face enemy fire when attacking, since its sensors are outranged.

As part of this sensing equation, the TASS report’s claim that the new T-90 variant can “exchange data with other vehicles in real-time,” is likely to be a source of great attention. “Networking” targeting data between nodes in combat across dispersed or otherwise disconnected areas of combat is certainly a capacity that, in an information warfare age, could massively enhance the lethality of the tank. This “data exchange” capability appears somewhat similar with the large U.S. emphasis now being placed upon AI-enabled data processing, long-range high resolution sensing and a substantial decrease in sensor-to-shooter time.

This effort mirrors a substantial U.S. emphasis upon new measures of combat networking, datalink hardening, computer processing speed and manned-unmanned teaming. Should the new Russian T-90 truly be able to network in ways even remotely comparable to what U.S. armored vehicles can now do, there will likely be much more concern relative to the new T-90.

At the same time, perhaps of greatest significance, none of these factors about the T-90 may be extremely significant, given the paradigm-changing breakthroughs now happening with the U.S. M1 Abrams tank and its ability to network with a wide range of air and ground platform “nodes” in a manner that reduces sensor-to-shooter time to a matter of seconds, not minutes.