In a Shift, Germany to Supply Ukraine With Air-Defense Systems 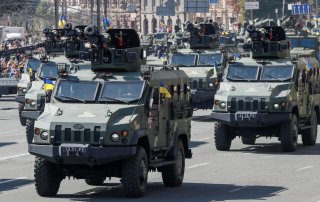 Germany, long loath to provide Ukraine with heavy weapons, appears poised to provide Kyiv with a powerful anti-aircraft system in one of the most significant turnabouts in Berlin’s limited involvement in the Russo-Ukrainian War.

Reuters reports that Berlin is mulling a decision to supply Ukraine with the IRIS-T SLM,  medium-range surface-to-air defense system, following protracted—and often rebuffed—calls for heavy weaponry by the Ukrainian military.

Diehl Defence, the German company behind the design, explains that its “state-of-the-art air defense system” offers customers a high degree of modularity and customizability.

“The possibility of integrating a variety of different sensors and effectors provides the basis for customer-specific solutions,” the company explains in a promotional brochure. “Thanks to the flexibility in selecting different components, such as carrier vehicle or radio equipment, material already introduced into service can be used, or national industry can be involved.”

In addition, Diehl explains that “the use of standardized interfaces provides the optimum basis for future upgrades or expansions.”

The IRIS-T SLM launcher offers up to forty kilometers of effective range and coverage of up to twelve kilometers in altitude, a significant compliment to Ukraine’s aging Soviet-era air defense systems.

Furthermore, “the seeker assisted radar proximity fuze and the large warhead give the missile a remarkable antimissile capability. Predictive flight path tracking and lock-on-after-launch features enable the missile to engage targets in the rear hemisphere as well.”

Though Ukrainian forces would like to start fielding the system immediately, it will take some time before Ukrainian troops are trained on the anti-air system. It may take even longer to manufacture the weaponry and send it to Ukraine, potentially up to four years.

Despite the amount of time that it could take to get the IRIS system into the hands of Ukrainian forces, actually signing off on the sale signals what could be a tectonic shift in German defense policy.

Long loath to export weaponry to conflict zones due to its past, Germany has found itself at odds with the vast majority of its NATO allies during the war in Ukraine. German chancellor Olaf Scholz has demurred when questioned about his government’s increasingly out-of-step refusal to export any weapons.

Now, it seems that Berlin may have come to terms with shouldering the responsibility of defending Ukraine and Europe.