Should the Air Force Build a Non-Stealth Bomber? 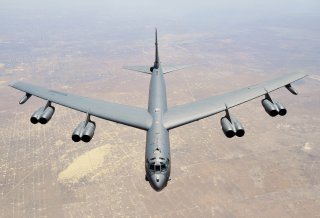 The Northrop Grumman B-21 Raider won't enter service until at least 2025 at the earliest, and it could be decades before it completely complements and then replaces the Boeing B-52H Stratofortress, Rockewell B-1B Lancer and Northrop Grumman B-2 Spirit. However, some critics are warning that the United States Air Force should be thinking not just about the B-21 Raider—an advanced, very long-range, heavy-payload stealth intercontinental strategic bomber—but also deploying a non-stealth bomber that can do the job of the B-1 and B-52 bombers.

One notable concern is that even by 2050, which is when the B-52H Stratofortress could be finally retired after nearly one hundred years in service, the Air Force's fleet of B-21 Raiders could be in the range of eighty to one hundred aircraft. While there have been calls to increase that number to as many as 150 to 180 aircraft, even that would be well short of the 225 bombers theoretically needed in a renewed era of great power competition.

Earlier this month, Maj. Shane Praiswater suggested in an article published by Defense One that the U.S. Air Force should consider a new “non-stealthy bomber”—to handle the jobs being done currently by the B-1 and B-52 bombers. Praiswater suggested this should be a priority as the acquisition of one hundred stealth B-21s, combined with seventy-five existing B-52 bombers, will result in a bomber force of just 175 aircraft around 2040 when the B-1 and B-2 bombers start to retire.

The numbers actually seem positive as it would compare favorably, noted Praiswater, as this would provide the Air Force with a fleet of 140 bombers. However, a decade later with the B-52s coming out of service—if they can even last that long—the U.S. Air Force may be left without much of a bomber force. The other consideration is whether the Air Force plans to only have a single type of bomber in its inventory.

It is true that the Air Force will need far more long-range stealth bombers, but the question is how long one platform can be pushed.

The B-1 is actually far younger than the B-52 but continuous operations in Afghanistan, Iraq and Syria took its toll on the airframes. The Air Force was able to “save” the platform by temporarily by standing it down, Praiswater noted. Then by divesting seventeen of the aircraft the Air Force has been able to maintain the best of the remaining jets. Even with retirement on the horizon, the Air Force just completed an eight-year-long project that massively upgraded the Cold War-era B-1B Lancer fleet. The total cost was $1.27 billion, but could keep the B-1 flying well into the 2030s and perhaps longer.

However, the B-1 and B-52—even with upgrades—won’t be able to fly forever, and it is simply not fiscally possible to see a fleet of 225 or more B-21s in service. But as Praiswater also suggested, even if it were possible, the Air Force would have a bomber fleet that would be appropriate only for selective missions. Those missions likely wouldn’t be for deterrence operations with allies and partners, such as last month's Allied Sky, which saw six B-52s take part in flights over all thirty NATO partner nations. The B-52 was the right aircraft for that job, and the Air Force should be thinking of the next aircraft to fill that role.