The Sisi Doctrine: Inside Egypt’s Pivot to Africa 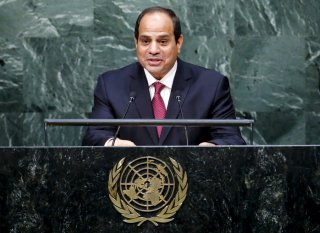 In its bid to diversify relations and cultivate its rarefied position under Abdel Fattah el-Sisi, Egypt will surge ahead by hosting the 2022 United Nations Climate Change Conference. The conference is slated to provide Egypt with the opportunity to offer a “greater voice to key nations in Africa that seek a larger role for natural gas in the energy transition process.” Egypt, in recent years, has supported the African Continental Free Trade Area Agreement and actively participated in the African Union (AU). This reconfiguration of policy has provided Cairo with the ability to collect geopolitical accolades through greater engagement in Africa and beyond.

For thirty years under Hosni Mubarak Egypt disengaged with the continent. This was partly due to an assassination attempt in 1995 during the Organization of African Unity (the African Union’s predecessor) meeting in Ethiopia. The end of Mubarak's rule spelled the end of Egypt's “influence in the Nile Basin region.” The country was also struggling to solidify its identity as a Mediterranean or Arab country.

Under el-Sisi there has been more flexibility in terms of alignment. Egypt has augmented ties through various ventures targeting continental relations, such as an investment fund that would work towards the expansion of information technology infrastructure and finance digital transformation in Africa. This investment is likely to power knowledge and technology-based economic development. The Egyptian Export Development Fund has also been paying half of the shipping and transportation fees for goods imported by Africa to encourage trade. New trade offices in five African countries and a logistics center in Kenya were also established. The Egyptian Agency of Partnership for Development extended scholarships to foster linkages on the continent as part of its concerted effort to focus on Africa.

Notably, Egypt has been involved in mediation efforts in Libya while working to resolve differences between Somalia and Kenya. At the same time, Cairo remains embroiled in the dispute regarding the Great Ethiopian Renaissance Dam (GERD) that has prompted the country to seek cooperation with other countries, such as Rwanda, to garner leverage through the signing of a memorandum of understanding in “information technology and posting, diplomatic training, sports support.” Egypt has started work on the Magdi Yacoub Heart Center in Rwanda that would bind the two countries together in the quest for health security and strengthen Cairo's efforts to increase its health sector interests in Central Africa.

This effort to recalibrate disregarded bonds has necessitated the formation of new security initiatives as well. In April 2021, Egypt and Uganda agreed to an agreement to share military intelligence after the collapse of the Kinshasa negotiations over the GERD crisis. Egypt also concluded a military agreement with Sudan that saw “Cairo's readiness to meet all of Sudan's demands in all military fields” and Burundi, which was in large measure to gain support against the GERD. Burundi and Egypt negotiated a pact pertaining to a military cooperation protocol that aims to foster greater cooperation through joint drills.

Egypt has to contend with the perception, promoted by Ethiopia, that Cairo is intent on achieving “hydro-hegemony.” These assertions are notably accompanied by saber-rattling and bellicose statements. In tandem, Ethiopia has promoted the GERD as a project that shapes national pride, making compromise complicated and requiring Egypt to gather support from other countries on the continent.

Egypt is working to anticipate and fulfill the development requirements of countries, such as Rwanda, in infrastructure, health, and education. Another potential priority is promoting people-to-people ties by promoting diplomatic training, youth sports, museums, information technology, and postal services. Meanwhile, Egypt has maintained an emphasis on shoring up its enduring partnerships with fellow North African countries while forging new ties. Cairo has looked toward multilateral efforts and joined five other nations to launch the Africa Green Hydrogen Alliance and bid other African nations to join. The effort was led alongside Kenya, South Africa, Namibia, Morocco, and Mauritania with the aim of strengthening partnerships by boosting the growth of green hydrogen projects in Africa. The alliance is slated to enhance access to clean energy sources, improve job prospects in the zero-emission economy, promote public health advantages, and provide opportunities for research and development.

Similarly, relations with Uganda have been revitalized with the Uganda military signing an agreement with the General Intelligence Directorate, Egypt’s primary intelligence agency. Egypt and Uganda's linkages have expanded beyond the defense sector to other areas. For instance, Egypt assisted Uganda in building a solar power plant, promoted business ventures between the Egyptian Industrial Development Authority and the Uganda Investment Authority, and collaborated in agriculture-related development. The Egyptian Ministry of Water Resources and Irrigation was also involved in flood mitigation projects in western Uganda that are a precursor to the creation of rainwater gathering dams and the boring of underground wells in hard-to-reach areas in Uganda. The focus on water-related issues has helped to keep Uganda from “following the same stubborn Ethiopian policy against Cairo.”

Cairo has been concerned about managing relations in a relatively sustainable form, particularly so the GERD dispute tilts in Egypt's favor while increasing pressure on Ethiopia that would lead to a compromise and legitimize the policies being pursued by el-Sisi. The approach has been part of the “Sisi doctrine,” which is only likely to work under an authoritarian system in a small time frame. The Sisi doctrine also includes arms import diversification, executing a pivot towards Africa, and inculcating deeper ties with China and the European Union.

To that end, Egypt and Sudan are jointly invested in a binding agreement whereas Ethiopia maintains its preference for nonbinding guidelines. Notably, future water-related issues that might arise, such as Rwanda and Burundi’s nascent Akanyaru Multipurpose Dam project, are likely to follow the precedent set by the GERD resolution. This extensive engagement by Egypt begs the question if relations will ebb after the GERD issue is resolved or if the current approach can be used to further ties, particularly as the country faces increasing vulnerabilities from traditional and non-traditional threats alike.

Arushi Singh is a graduate of the Department of Geopolitics and International Relations (GIR) at Manipal Academy of Higher Education in India. Her areas of interest include the geopolitics of West Asia, geopolitical implications of great power competition in Africa, Russia’s foreign policy orientations, and emerging technologies. She is currently a writer at the Consortium of Indo-Pacific Researchers.