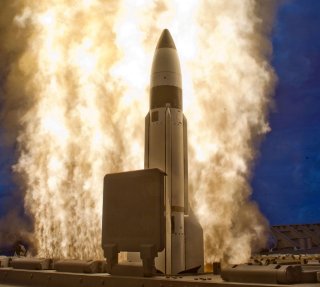 The Pentagon is testing new upgraded versions of its SM-3 interceptor missile to see if it can destroy intercontinental ballistic missiles (ICBMs).

This is quite significant, given that the SM-3 has thus far been primarily thought of as a defense against short, medium and long-range ballistic missile threats. For quite some time, the SM-3 has been regarded as a weapon capable of reaching the outermost areas of the earth’s atmosphere, yet not ideally suited for mid-course or ICBM defense.

This may change, according to Assistant Secretary of Defense for Strategy, Plans and Capabilities Victorino Mercado, who told reporters that “MDA plans to conduct flight tests of the SM-3 Block IIA interceptor against an ICBM-class target.”

As discussed by Mercado, this application would bring new tactical possibilities to layered defenses and expand the attack envelope for the SM-3. The SM-3 Block IIA, now in existence for several years, incorporates a software upgrade enabling the integration of more precise and discriminating sensor technology, longer flight times and greater range beyond the earth’s atmosphere.

The SM-3 is a kinetic energy warhead able to travel at more than 600 miles per hour; it carries no explosive but instead relies on the sheer force of impact and collision to destroy targets.

ICBM defense would be a game-changer for the Pentagon’s missile defense, given that SM-3s fire from both Navy ships and land-based Aegis Ashore launchers in Poland and Romania. Land-based applications of the SM-3 in Europe have been deployed to defend against long-range ballistic missile threats on the continent. Now, ship-fired SM-3s could bring new “kill” or intercept possibilities over ocean areas potentially less reachable by existing defenses.

Moreover, an anti-ICBM SM-3 would bring more “shots” or options to strike or destroy an ICBM as it travels just beyond the boundary of the earth’s atmosphere. The SM-3 Block IIA could complement existing Ground Based Interceptors (GBI) and help the Pentagon bridge the time lapse between now and the end of the decade when a new ICBM interceptor becomes available.

The Pentagon and MDA are now working on a new interceptor expected to be ready by 2028. In the interim, military is working to modernize and sustain its current arsenal of GBIs with software upgrades and the addition of more discriminating seekers. Ultimately, the Pentagon hope to arm GBIs with multiple “kill vehicles” to enable a single interceptor to fire many shots at an enemy ICBM, thereby increasing the likelihood of a successful “kill.”