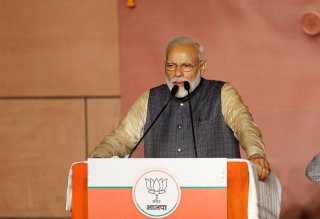 Indian minorities affairs minister Mukhtar Abbas Naqvi announced on Wednesday that he had tendered his resignation, marking the departure of the final Muslim member of India’s ruling Bharatiya Janata Party (BJP) from office and leaving the country without a Muslim lawmaker in the ruling coalition for the first time in its seventy-five-year history.

Naqvi’s resignation came the day before his term in office as a member of the Rajya Sabha, the upper house of India’s bicameral parliament, was scheduled to end. Naqvi, aged sixty-four, had been the minister for minority affairs since 2016, serving as the only Muslim among the party’s 400 parliamentarians for much of that time. He was replaced in his role by Smriti Irani, a Hindu member of the BJP.

The growth of the BJP’s influence under Prime Minister Narendra Modi has also led to an increase in Hindu nationalist confrontations with India’s Muslim community, which numbers 200 million, or roughly 14 percent of the country’s population. Several BJP lawmakers have been implicated in violent actions against Indian Muslims, and prior to his election as prime minister, Modi had been banned from entering the United States due to his alleged role in stoking anti-Muslim riots as the chief minister of Gujarat in early 2002. In late May, two BJP officials caused a brief diplomatic crisis after making comments widely criticized as offensive toward the Prophet Muhammad, leading to tensions with several of India’s major Arab commercial partners. Both offending members were later disciplined, and one was expelled from the party. Rumors circulated after the incident that Modi might seek to appoint Naqvi as India’s ceremonial vice president in order to assuage the Arab world’s concerns about Islamophobia within the country.

The BJP has defended itself from accusations of Islamophobia by pointing to the membership and prominent roles of other Muslims, including party spokeswoman and former journalist Shazia Ilmi and Central Election Committee member Syed Shahnawaz Hussain. The BJP attempted to elect seven Muslim candidates to India’s parliament in 2014, and six in 2019, but all of them lost, despite the party’s overall landslide victories in both elections.

India’s next general election is scheduled to take place before May 2024, with Modi seeking a third term as prime minister. It is not yet clear who the Indian National Congress, the BJP’s largest opposition party, will put forward as its candidate for prime minister.