Speed Kills: These Ships Will Zip Marines Around the Pacific 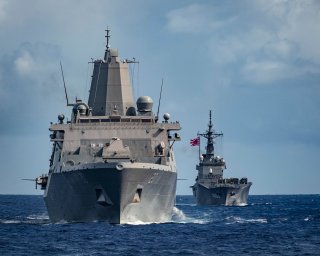 The U.S. Navy just took service of one of its newest ships, a San Antonio-class Amphibious Transport Dock Ship.

A statement from the Navy covering the commissioning event explains that the “nearly 25,000-ton Fort Lauderdale is 684 feet in length. Four diesel engines will power the ship to speeds in excess of 22 knots, and it will homeport at Naval Station Norfolk in Norfolk, Virginia.”

Still, the future of U.S. Marine Corps transportation is smaller rather than bigger.

One of the most ambitious new projects the Marine Corps has in the works is the future Light Amphibious Warship. These relatively small and lightly-armed transport ships will transport small groups of Marines throughout the Pacific in a hypothetical future conflict in the Indo-Pacific region.

Compared to the San Antonio-class, the Light Amphibious Warships will be much smaller, transporting groups of less than 100 Marines plus their equipment and some land vehicles.

The move is part of Marine Corps Commandant Gen. David Berger’s vision for the Corps, Force 2030. As a part of that guiding document, the Marine Corps is transitioning away from the second land army it became during the United States' involvement in the Middle East and toward a true maritime force.

In recognition of the contested environment the Marine Corps would face in the Pacific, the Corps is wholeheartedly embracing a high degree of decentralization. And the Light Amphibious Warship will be the backbone of Marine decentralization at sea in the near future.

Flitting to and fro from tiny specks of land deep in the Pacific Ocean, Marines in the future will wreak havoc on enemy ships, denying the enemy use of the land and even hunting down and sinking surface vessels, a domain typically undertaken by the Navy.

In short, the future of the Marine Corps is in the Pacific, and it is thoroughly aquatic.