Speed Is the Name of the Game in Next-Generation Warfare 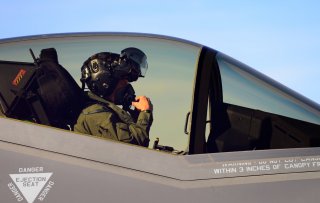 Wars in the future may not look like a mechanized force-on-force armored engagement across a linear battlefield. Instead, they may involve dispersed, multi-domain platforms moving at much faster speeds than previously imagined.

Weapons, explosives, guns, and bombs will be extremely important, particularly when it comes to range and precision targeting. But their effectiveness when it comes to achieving a margin of superiority will rely almost entirely upon speed. The speed at which information is gathered, processed, analyzed, and transmitted from sensor nodes to shooters or weapons will likely determine victory in war.

The force that is able to gather, analyze, organize and distribute time-sensitive targeting specifics and get information to weapons and fire faster is likely to prevail. This will of course rely upon the range and precision of a force’s sensor systems. Yet even the most precise long-range weapons may not be extremely effective without targeting data.

Given the range of sensors and the growing extent to which aircraft, ships, ground forces, and even satellites can send high-speed packets of information to one another, warfare will “expand” across vast, otherwise disconnected areas of operations. This anticipated reality is informing senior weapons developers now architecting weapons, sensors, and platforms to fight into future decades. Technologies are being developed with a specific mind to emerging concepts of operation. There is an evolving and entirely new concept of Combined Arms Maneuver warfare.

“Maneuver has got to be joint as it will evolve. War will become more rapid and the battlespace will expand based on robotics, space, and cyberspace,” Maj. Gen. Ross Coffman, Director of the Next-Generation Combat Vehicles Cross-Functional Team, told the National Interest in an interview.

Traditional Combined Arms Maneuver is based upon an integrated mix of combat effects to include artillery, ground assault, close air support, and mechanized armored vehicle positioning. Each piece of the overall effort is designed to contribute to an overall desired effect. Long-range rockets and artillery will, for example, seek to suppress enemy defenses, soften up target locations and help open an attack corridor for advancing ground forces to maneuver into position. While moving to contact, approaching infantry and armored forces will operate with close air support from helicopters, drones, and even some fixed-wing fighters.

Wars in the future, however, will unfold across vast expanses of territory, ocean, air and space, connecting previously separated areas of operation. Attacking ground forces will, for example, be in position to receive data and intelligence information from high altitude bombers, fifth-generation fixed wing aircraft, ships at sea and forces hundreds of miles away.

The new possibilities for information transfer mean that data needs to not only move further distances but will need to move much much faster to achieve information dominance. This is the basis of the current Army effort to drastically reduce sensor-to-shooter time, enabling an attack force to operate inside of or faster than an enemy's decision cycle.

“We have to move faster. We have to do it more efficiently, so we are making decisions that not only defeat our adversaries, but we’re able to do it in such a manner that we can do it more rapidly than anyone on earth,” Coffman said.