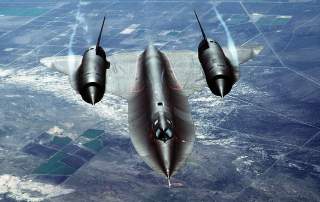 The war itself as the American reconnaissance continued. The Soviet Union threatened to deploy troops to reinforce Egypt; the U.S. ramped up its nuclear posture. Rather than risk atomic war, Israel pulled back its forces.

Image: SR-71, unofficially known as the "Blackbird," is a long-range, advanced, strategic reconnaissance aircraft. The first flight took place on Dec. 22, 1964. The U.S. Air Force retired its fleet of SR-71s Jan. 26, 1990, but returned them in 1995 until January 1997. Throughout its nearly 24-year career, the SR-71 remained the world's fastest and highest-flying operational aircraft. (U.S. Air Force photo/Tech. Sgt. Michael Haggerty)