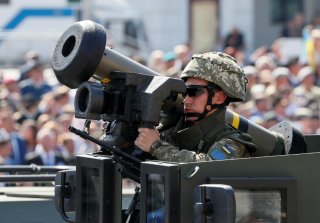 As fears of a Russian invasion of Ukraine grow, Ukraine—which decisively broke with Russia after its Euromaidan Revolution in 2014—has reached out to Europe and the United States for material, if not direct military, support.

Although Ukraine is not a member of NATO and cannot rely on the military alliance’s collective security pact in the event of an attack, it has formed close relationships with several NATO members and has begun to receive military support from a number of countries within the alliance.

Although President Joe Biden effectively ruled out a direct intervention to support Ukraine, the United States has provided the Ukrainian military with extensive aid in recent months. In December 2021, the Biden administration approved an additional $200 million in aid for the Ukrainian army, providing it with arms and ammunition, radios, medical equipment, and—crucially—Javelin anti-armor missiles, a significant potential deterrent against Russian tanks.

The U.S. Embassy in Kiev announced on Friday that the first 200,000 pounds of “lethal aid” had arrived in the country, with more to follow.

Kiev has also received military support from a handful of other European nations. British secretary of state for defence Ben Wallace indicated on Monday that anti-armor “defensive weapon systems” and a contingent of British military trainers would be deployed to Ukraine.

Canadian media reported earlier in the week that a number of its special forces troops had been sent to Ukraine, although the country’s Department of National Defence did not confirm the story.

The Baltic states—Estonia, Latvia, and Lithuania—also announced their intent to provide material support to Kiev in the form of Javelin and Stinger anti-air missiles.

Even as the military buildup continues, U.S. and European diplomats have sought to negotiate an agreement with Russia to end the crisis. However, the Kremlin has insisted that NATO formally commit to excluding Ukraine, a condition that NATO officials have refused.

Biden indicated on Thursday that he considered “any assembled Russian units [moving] across the Ukrainian border,” no matter the scale or cause, as an invasion that would trigger an American response.

“Let there be no doubt at all,” the president said in his statement. “If Putin makes this choice, Russia will pay a heavy price.”

Biden’s comments appeared to clarify a comment he made on Wednesday that drew an apparent distinction between a “minor incursion” and a large-scale invasion.

That gaffe led to intense criticism in Washington and around the world. Ukrainian President Volodymyr Zelensky acidly noted on Twitter that “there are no minor incursions … just as there are no minor casualties.”