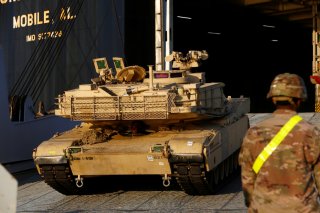 The announcement, issued on February 17, explained that “the State Department has made a determination approving a possible Foreign Military Sale to the Government of Poland of M1A2 SEPv3 Main Battle Tanks and related equipment for an estimated cost of $6.0 billion.”

While the lion’s share of the agreement is the M1A2 SEPv3 tank—one of the most advanced variants in America’s arsenal—it also includes a range of ammunition, support systems, auxiliary crew-served weapons, spare parts, training equipment, and trainers.

The deal also covers twenty-six HERCULES Combat Recovery vehicles and seventeen M1110 joint assault bridges. The DSCA also explained that the “proposed sale will support the foreign policy and national security of the United States by helping to improve the security of a NATO Ally that is a force for political stability and economic progress in Europe.”

The DSCA is a unit within the Department of Defense responsible for American military cooperation with friendly nations. It provides partner nations with training and weaponry, as well as technical and financial assistance. The DSCA succinctly explains that its mission is to “advance U.S. defense and foreign policy interest by building the capacity of foreign partners in order to encourage and enable allies and partners to respond to shared challenges.”

According to the DSCA, the sale “will improve Poland’s capability to meet current and future threats by providing a credible force that is capable of deterring adversaries and participating in NATO operations. Poland will have no difficulty absorbing this equipment into its armed forces.” Importantly, the DSCA added that the “proposed sale of this equipment and support will not alter the basic military balance in the region.”

Russia’s military presence around Ukraine has ballooned to over 150,000 troops, and some estimates place the number at nearly 200,000. And despite Russian assurances to the contrary, that number appears to be rising.

Still, the tanks and related equipment will not arrive in Poland overnight. The DSCA statement cited a five-year time window for testing and training the equipment before it can be fielded by the Polish military.

Although not yet in service, the M1A2 SEPv3 tanks will significantly bolster Warsaw’s defensive capabilities. And in the face of Russian revanchism, they are greatly needed.