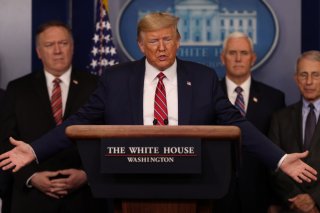 In the space of a few days, U.S. and British officials have backtracked from a shamefully complacent response to the spread of the novel coronavirus 2019 (COVID-19) to begin implementing a sweeping new virus suppression strategy.

Across the United States, local and national policies are causing sporting events to be canceled, restaurants, gyms, universities and public schools to be closed, and international travel to be largely banned. Moreover, the entire population is being instructed to “socially distance” itself from contact with others. These measures echo sweeping restrictions imposed in China to combat the spread of the disease.

This aggressive new stance was reportedly triggered by a terrifying new report from the highly respected Imperial College in London, which finds that anything short of society-wide isolation measures will result in death tolls approaching or exceeding World War II battlefield casualties. That conflict directly claimed an estimated 60 million lives, not counting disease and famine deaths.

The study, informed by new data on the spread of the disease in China and Italy, has overturned the more conservative “mitigation”-style measures previously recommended by the College.

Let’s delve into the sobering numbers reported by the College’s statistical modeling.

As described in this earlier article, COVID-2019 is much deadlier than the seasonal flu due to two factors: it’s rate of transmission and the dramatically elevated risk of death it imposes on persons over the age of sixty. Specifically, it’s estimated that each person infected by the virus transmits it to 2.4 other persons. And each case has an estimated 1 percent to 1.4 percent chance of resulting in death due to breathing problems and complications, making it around a hundred times deadlier than the seasonal flu.

However, the risk of death is not at all evenly distributed across the population: it’s almost non-existent for children, and disproportionately higher for elderly persons, approaching 9% for those exceeding eighty years old.

Still, the seasonal flu claims hundreds of thousands of lives annually, but we implement relatively few coercive measures to prevent its spread. What if governments treated COVID-19 similarly?

In such circumstances, the Imperial College study estimated that one-third of transmissions would occur at home, one-third at schools and the workplaces, and one-third in public. It also factored in an average incubation period of 5.1 days for COVID-2019, with a person becoming infectious to others 4.6 days in (twelve hours before displaying symptoms). An infected person is also judged unlikely to be re-infected soon.

Hospitals would be utterly incapable of dealing with the influx of the sick, and many would die due to unavailability of medical facilities and equipment. By April, demand on ICU or critical care beds would be 30 times greater than the available supply.

Some claim the number of deaths could actually count twice as high (4 million Americans, 1 million British nationals) due to the inevitable shortage of ventilators necessary to treat cases of the disease.

Even sticking to the conservative 2.2 million death figure, given that roughly one out of twenty-three persons on the planet lives in the United States, that extrapolates globally to a worldwide death toll of around fifty million. Of course, some countries will experience lower infection/death rates (younger populations, faster government response and greater healthcare capacity) and others may have higher rates due to inadequate containment measures, older populations, or insufficient healthcare capacity, so that figure should be strictly taken as a rough ballpark.

The no-response scenario, to be clear, is unrealistic as most governments are at least adopting moderate response measures outlined below. However, it gives us a chilling baseline.

What if governments adopt traditional disease-containment methods that have been employed against other recent pandemic-threats such as SARS and swine flu?

This strategy aims to slow the pace of transmission and improve the odds of survival until the population builds up a natural immunity and vaccines become available. Such a regime encompasses quarantining and controls over sick individuals, and social isolation of elderly persons over the age of sixty. Sporting events and the like are shut down, but not schools and most workplaces, and there are not society-wide social isolation measures.

A moderate response regime is effective in halving deaths from COVID-19—but that still leads to 1.1 to 1.2 million deaths in the United States. At peak, demands for hospital beds would exceed surge capacity by a factor of eight, resulting in some people dying from treatable instances of the disease.

This brings us to the current, unprecedentedly stringent rules being hastily implemented today in varying ways in China, Europe, and the United States: not merely quarantining infected individuals, but closing down much public life and most public spaces such as schools and many workplaces. These measures would need to be instituted as soon as possible and maintained for a significant time (minimum five months).

Their aim is to outright halt the spread of the disease to the point that each infected person infects less than one other person on average. A suppression strategy was used to contain the highly deadly Ebola epidemic of 2014.

For as long these measures are implemented, disease transmission is slowed down considerably, and the rate of new infections remains within the capacity of the healthcare system. The model predicts that demand on hospital beds would largely remain at or, just slightly above the available capacity—except in the months of September to December.

In Great Britain, a strict suppression strategy could possibly reduce expected deaths to around 20,000. Perhaps the death toll in the United States might clock in around roughly four times that, based on above mentioned figures.

Waiting on a Vaccine

Unfortunately, the stringent regime must be sustained over time until a vaccine is developed—and the study estimates that could take as many as eighteen months. Otherwise, COVID-19 outbreaks will resurge once the measures are relaxed.

At best, it may be possible to “stagger” relaxations of social isolation measures for weeks/months at a time to pump a little life into the economy, before reinstituting them to curb the inevitable new outbreaks that arise. However, the study states that social distancing measures would need to remain in effect two-thirds of the time to remain effective.

As endless as that danger seems, there is an endgame based on acquiring a vaccine. In the meantime, we will have to work proactively to cultivate mental resilience and maintain our social bonds as best we can over a distance to combat the negative effects of a lack of person-to-person contact and shuttered schools and workplaces. Contemplating those challenges in the coming months can be undeniably distressing—but at least it’s hopefully less so than experiencing deaths society-wide approaching the scale of a world war.