Submarine Hunter: The Fire Scout Drone May Have the Navy Covered 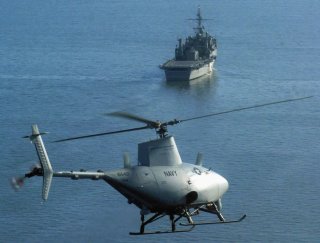 The U.S. Navy is expanding the operational scope of its helicopter-like, vertical-take-off-and-landing Fire Scout drone as part of an effort to increase its impact in major maritime warfare. In addition to extending the Fire Scout’s traditional role with intelligence, surveillance, and reconnaissance (ISR) and video surveillance, the Navy is also developing the drone for submarine-hunting and beyond-the-horizon networking. Various emerging laser and radar technologies will be used by the drone to detect and destroy enemy subs, ships, and mines.

When an enemy submarine surfaces for just a few minutes, there is a short time window with which to engage and destroy the boat before it quickly disappears. Should a Fire Scout drone be in a position to use its long-range, high-fidelity sensors, it might be able to quickly cue armed aircraft, ship commanders, or other decision-makers to authorize the use of force for a quick Navy strike and destroy the submarine. The use of long-range, high-speed ISR can greatly shorten the “sensor-to-shooter” timeline and help place the Navy in an advantageous position vis-a-vis its adversaries.

There is a critical manned-unmanned teaming aspect to this kind of submarine hunting, as a Fire Scout drone could work in close coordination with a Sonobuoy-dropping, torpedo-armed MH-60R Navy Seahawk helicopter. The two platforms could exchange time-sensitive information across safe stand-off distances wherein a Fire Scout could direct a manned helicopter to attack a submarine or surface threat it has identified with Hellfire missiles, laser-guided rockets, or even torpedoes.

“Fire Scout can provide the long-range targeting along with in-flight target updates, and ensure that we keep the ship safe and out of harm's way and still be able to guide the munition to its target,” Lance Eischeid, director of the Fire Scout program at Northrop Grumman, told The National Interest in an interview.

An unmanned, forward-operating aerial sensor able to connect quickly with its host ship could alert commanders about where there might be weaker coastal defenses or high-threat concentrations of enemy weapons and assets, without placing Marines or sailors at risk. Such an asset could bring paradigm-changing levels of survivability for approaching ship-to-shore craft, which could potentially be vulnerable to enemy fire while in transit.

The Navy’s Landing Craft Air Cushions (LCACs) or newer Ship-to-Shore Connectors can efficiently transport U.S. forces to shore during an amphibious attack. While they can benefit from air support or ship-based suppressive fire, they are not well-armed and could be targeted while in route to fortify landing forces. This mission is often the primary role of a Navy Amphibious Landing Dock, which dispatches transport craft for amphibious landings. Also, as the Navy’s Distributed Maritime Operations strategy rapidly comes to fruition, Amphibious Landing Docks are expected to perform more autonomous missions independent from an Amphibious Ready Group to improve the fleet’s range and survivability. Dispersing the Navy’s approaching forces not only reduces its vulnerability to enemy fire but can also maximize the range and scope of a given assault, enabling commanders to quickly benefit from large amounts of real-time information.

Adding long-dwell ISR to these kinds of missions could help protect LCACs and amphibious landing forces by finding threats at distances beyond where surface ships can detect them, enabling counterattack possibilities and other combat-enhancing adjustments. As part of this, the Navy has also experimented with arming the Fire Scout in recent years, something which has not formally been decided upon. Nonetheless, this tactical option would place forward unmanned systems in a position to destroy key targets under the direction of human decisionmakers while manned platforms operate at safer stand-off distances.