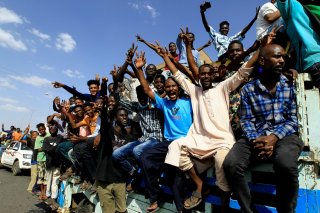 Four Sudanese civilian ministers, who were imprisoned on October 25 after the Sudanese military’s coup d’etat, have been released and returned to their homes, according to Sudan TV, the country’s state-run television network.

The four ministers were identified by the network as Hashem al-Rasoul, Minister for Telecommunications; Hamza Baloul, Information Minister, Ali Geddo, Trade Minister; and Youssef Adam, Youth and Sports Minister. The station indicated that they had been released on the orders of General Abdel Fattah al-Burhan, the coup’s leader and Sudan’s current de facto head of state. Other ministers imprisoned on October 25 remain in custody.

The four men’s release came as reports have circulated that the military—in the face of overwhelming domestic and international opposition to the coup and increasing political and economic sanctions—has sought to resolve the question of governance by returning civilians to power via an internal agreement. Burhan has reportedly sought to enter negotiations with Abdalla Hamdok, the country’s former prime minister, who was initially imprisoned during the coup before being released to house arrest.

Burhan has indicated that the new government, as he envisions it, would be largely composed of non-political technocrats, and he suggested that Hamdok return to the prime ministership and continue to lead the country. Hamdok’s office, however, has denied that the offer was extended, insisting that all remaining detainees should be released, and the country’s previous government reinstated before any negotiations could take place.

As the negotiation process has continued, so have civilian protests against the coup. Although U.S. Special Envoy to the Horn of Africa Jeffrey Feltman noted that the Sudanese military had exercised “restraint” toward the protests and avoided a violent crackdown, around a dozen protesters have been killed since the coup, and hundreds more have been injured. The Sudanese military, which has led the country for much of its modern era, has been criticized by civilian activists who tied it to the worst excesses committed during the thirty-year rule of Sudanese dictator Omar al-Bashir, although Burhan and other officers helped to overthrow al-Bashir in 2019.

Prior to Wednesday’s statement, the two countries had only called for “stability” in Sudan, rather than condemning the coup outright. Egypt, which also maintains a deep relationship with the country, has also avoided condemning Burhan.