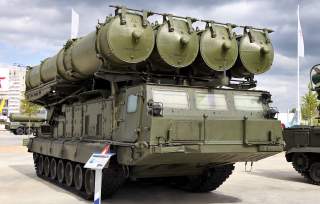 The multi-party conflict in Syria has led to numerous strange and tragic incidents.

On September 17, Iran began transferring weapons to Hezbollah forces for use against Israel at a Syrian technical facility near Latakia, Syria—the site of a Russian military base.

But the Syrian air defense troops reportedly continued firing missiles well after the Israeli planes had left the area—and this time, a long-range missile fired by an S-200 system blew up a Russian spy plane over the Mediterranean Sea as it returned to base, killing all fifteen aboard.

The Il-20M ‘Coot’ surveillance plane is a four-engine turboprop airliner modified to scoop up ‘signature’ data on the radars and electromagnetic emissions of foreign military systems, eavesdrop on communications, and scan terrain with an infrared sensor and side-looking aerial radar. Slower than a typical jet airliner and a large target on radar, the Coot would have little hope of evading an air-defense missile.

Moscow first insinuated the plane had been shot down by the French navy frigate Auvergne cruising nearby in the Mediterranean. When it became clear the missiles had been Syrian, it reacted furiously by… promising to give the Syrian military better missiles?

Though Putin himself later characterized the incident as a regrettable mistake, most of the rhetoric from Moscow claims the Israeli fighter used the Il-20 as ‘cover’ for their strike—though coordinating such a ploy in advance would have been extremely difficult. The IDF maintains it did warn Russia in advance of the strike to ‘deconflict' the airspace, but the Russian military claims it was given only a minute of warning.

Even if that’s so, the Israelis also state that its jets were well outside Syrian airspace when the S-200 missile struck the Il-20M, placing the incompetence and lack of coordination of Syrian air defenses at fault.

This would track with U.S. reports that following a missile strike on April 14, 2018, Syrian air defenses shot forty missiles blindly into the sky after the U.S. missiles impacted—either shooting at ghosts or merely putting on a good show for the public.

To be fair, friendly fire incidents have bedeviled even U.S. air defenses in the past. During the 2003 invasion of Iraq, U.S. Patriot missile batteries shot down an RAF Tornado and a U.S. Navy Hornet, killing three pilots. In another incident, a Patriot battery mistakenly locked onto an F-16—only to have the radar silenced by an anti-radiation missile when the F-16 fired back!

At any rate, holding the Syrian military culpable does not fit with Moscow’s political designs in Syria. Instead, Russia announced that in retaliation for the Il-20 shoot-down, it would deliver superior S-300 missile systems to the force which had destroyed the airplane in the next two weeks—a move which Israel has long stridently objected to since it was first proposed in 2013.

Why does the Israeli government object to the S-300 system, and would it really pose such a threat?

In 1983, the Soviet Union transferred to Syria the first of forty-eight S-200 Vega-E air defense systems, (codenamed the SA-5b Gammon by NATO). Designed in the 1960s to provide long-range, high-altitude air defense of key cities and facilities, the S-200’s fixed platform can launch 10.8-meter long V880E missiles with cartoonishly large fins. Four solid-fuel rocket boosters clustered around the missile’s base supplement the primary liquid-fuel rocket motor to propel the nearly eight-ton missile over seven times the speed of sound to strike aircraft up to 150 miles away. The V880s are guided using uses semi-active radar homing, which means the battery’s ground-based fire control radar actively ‘pings’ approaching aircraft—allowing the missile to home in on that ping using a passive radar receiver.

The Syrian military allowed the S-200s to rust into decrepit condition, but in 2015 Russia began repairing the aged weapons. By 2016, enough S-200s had been refurbished that they were regularly firing at Israeli warplanes, though with little success.

IDF fighters dodged several V880 missiles and destroyed at least one S-200 battery in the last two years. However, in February 2018 one of the long-range missiles finally crippled an Israeli F-16, forcing the crew to eject over Israeli airspace—the first combat loss of an Israeli warplane in years.

Russia has developed two far more capable successors to the Vega, the S-300 and S-400, and agreed to sell Damascus the former, though it previously withheld delivery of a complete system due to Israeli pressure.

There are actually two distinct families of missiles both called the S-300, despite limited commonality: the P series, which can engage more missiles simultaneously, and the VM series, which is optimized for interception of ballistic missiles. The Russian military has already deployed both S-400 and S-300V4 missiles to Syria, and one of the simplest ways to transfer an ‘S-300’ to Syria would be simply to hand over the Russian S-300V4s. However, Assad was apparently promised the S-300PMU-2 Favorit model (NATO codename SA-20B Gargoyle).

Unlike the S-200, the S-300 is a mobile system which can deploy for firing in just five minutes. This means it can regularly relocate to avoid retaliatory or preemptive strikes. Each battery includes multiple vehicles, including one mounting a huge long-range 64N6 ‘Big Bird’ surveillance radar that can spot approaching aircraft from 200 miles away, allowing the battery to cue a 30N6 ‘Flap Lid’ engagement radar on another truck to generate a target lock when the aircraft enters missile range. This is coordinated by a separate command vehicle.

The PMU-2 can hit aircraft or short-to-intermediate-range ballistic missiles up to 125 miles away using the 48N6E2 missile which can travel to nearly seven times the speed of sound. For engagements of more maneuverable (i.e., fighter) targets, the battery can also fire smaller 9M962E2 active-radar guided missiles that use gas jets to pull off tight maneuvers to achieve a higher probability of a kill.

While the S-200 could only engage one target at a time, an S-300 battery can engage up to six targets with missiles fired from its multiple vertical launch tubes—rippling them off with only three seconds between each launch. Most importantly, it can network targeting data with multiple friendly systems, optimizing targets tracks and redundancy versus jamming and anti-radiation missiles.

These capabilities don’t make the S-300 or its successors invincible. Fourth-generation fighters can use a combination of jamming and long-range guided weapons to carefully suppress air defense batteries. Furthermore, stealth fighters can penetrate much farther into their radar coverage without being detected. Nonetheless, the S-300’s capabilities could make Israel’s frequent air raids on Syrian targets significantly more complicated, expensive and risky—and likely deter many from taking place at all.

However, Russia has claimed multiple times since 2013 that it will finally transfer S-300s without following through, so it remains to be seen whether this time will be different. Moscow may again conclude there would be little benefit to handing over the missiles to Assad.

While the IDF has taken pains to avoid killing Russian personnel, S-300s under Syrian control could wind up on the receiving end of an Israeli missile strike, to the detriment of the system’s reputation. After all, Israel’s drive to acquire its F-35I Adir stealth fighters is reportedly driven by an expectation that it may eventually need to deal with S-300s.