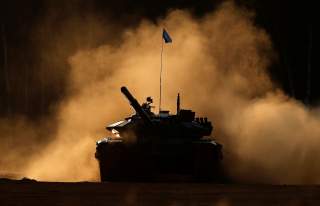 The T-72 is one of the most-built tanks in the post- Second World War world, a testament to their effectiveness and affordability. Quite a few companies — mostly former Soviet, Eastern European countries offer an extensive range of upgrade kits that will continue to prolong the T-72 series’ life for many years to come.

The T-72 series was designed to address shortcoming inherent to its predecessor — the T-64’s design — namely a very compact, but unreliable and underpowered engine. To address this deficiency, T-64s were outfitted with more powerful and more conventional diesel engines. While this helped alleviate the power issue, it became apparent after some time that a complete redesign would be in order, as the newly installed engine put undue stress on the tank’s hull.

The T-72 sits staunchly within the Soviet design camp: it is very light in comparison to American and NATO Main Battle Tanks at a slight 41 tons. This light weight, combined with its very wide tank treads, allow for very low ground pressure, facilitating good traction in boggy spring and winter conditions endemic to Russia during the spring as snow and and ice melt. Its cross-country performance is thus excellent.

Like many Soviet designs, early-model T-72s are rather underpowered, equipped with a decidedly feeble 780 horsepower engine. Later engine upgrades would improve output to about 1,130 horsepower, at which point the T-72 finds its stride, especially in off-road conditions.

Part of the T-72’s lightweight is achieved via it’s small stature and cramped interior, also in keeping with Soviet armor doctrine, which favors a squat, low-profile stature. It’s crew of just three benefit from an autoloader that further helps reduce its silhouette by keeping the crew number low.

Unfortunately, the T-72s had one major drawback — ammunition was not stored separately from the crew in a blow-out ammunition compartment. This drawback became apparent in Iraq, where a number of T-72s suffered catastrophic internal explosions.

Like many Soviet tanks, the T-72 has a nearly unending number of variations, tailored to specific customer needs. Many thousands of later model T-72s with extensively upgraded explosive reactive armor (ERA) are still held in reserve with the Russian Federation, and both Ukrainian and Russian companies offer upgrade kits to improve survivability for foreign customers.

In the 1980s, Saddam Hussein’s Iraq slightly modified a series of T-72 and called them the Lion of Babylon — thought they were anything but lions. Their only strength were in the front. Essentially, Iraq engineers welded a layer of steel to the frontal glacis, with a small gap in-between the original hull and the new layer, in an effort to dispel the explosion from a hit outward around the hull.

Although likely undergunned but more modern alternatives, the T-72 series has nonetheless enjoyed an extensive afterlife, especially in Africa and the Middle east, where lower-intensity conflicts continue to smolder. For customers who can’t afford an M1 Abrams or other western Main Battle Tanks — the T-72 is the way to go.

Image: A T-72 B3 tank operated by a crew from Russia drives during the Tank Biathlon competition at the International Army Games 2018 in Alabino outside Moscow, Russia, August 11, 2018. REUTERS/Maxim Shemetov.