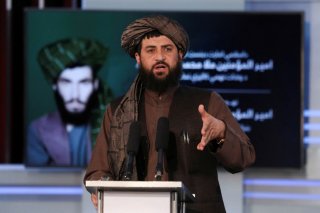 Mullah Mohammed Yaqoob, the acting defense minister of the Taliban-led government of Afghanistan, vowed on Sunday that the country would not allow “invasions” from neighboring countries—an explicit criticism of Pakistan, whose military conducted airstrikes along the Afghan border last week.

The airstrikes, which took place near the eastern Afghan provinces of Khost and Kunar, allegedly killed as many as forty civilians, including twenty children. Pakistan has not yet confirmed its involvement in the strikes.

“We are facing problems and challenges from both the world and our neighbors,” Yaqoob said on Sunday at a ceremony commemorating the death of his father, Taliban founder Mullah Omar. “The clear example is invasion by them [Pakistan] in our territory in Kunar.”

“We can’t tolerate the invasion,” the defense minister said. “We have tolerated that attack … because of national interests. Next time, we might not tolerate it.”

Pakistan’s Foreign Ministry has sought to downplay the significance of the strikes in Afghanistan’s border region, insisting that the two nations were “brotherly countries” in a press statement on Sunday, appearing to justify the raid on the basis that it had been conducted against militants opposed to the Pakistani government and associated with terrorism.

“The governments and people of both countries regard terrorism as a serious threat and have suffered from this scourge for [a] long time,” the statement read. “Therefore, it is important that our two countries engage in a meaningful manner through relevant institutional channels to cooperate in countering cross-border terrorism and taking actions against terrorist groups on their soil.”

Since the Taliban takeover of Afghanistan in August 2021, the Pakistani government has largely sought good relations with the new government. As the Taliban sought international recognition, Prime Minister Imran Khan urged the international community to work with the group to help the Afghan people, although he did not officially recognize the group. During the Taliban’s first period of rule over Afghanistan from 1996 until 2001, Pakistan was one of three countries to recognize the group, along with Saudi Arabia and the United Arab Emirates.

However, tensions have persisted between the new Afghan government and Pakistan—particularly over the Durand Line, the contentious 1,600-mile border separating the two countries. Pakistani forces have increased counter-terrorism operations along the border in recent months, and Pakistan has begun construction on a border fence, disrupting the livelihoods of local residents and merchants dependent on the sometimes-illegal border trade. The fence has also led to protests, and periodic sabotage, by the Taliban.