Taliban Struggles to Respond to Major Earthquake in Afghanistan 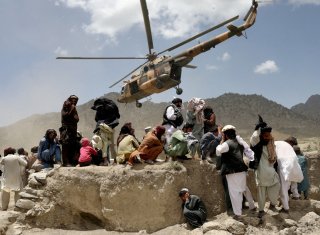 Following a major earthquake in Afghanistan’s southeastern Paktika and Khost provinces—the country’s most significant natural disaster in more than twenty years—the Taliban-led government has struggled to mount humanitarian relief efforts and has appealed to the international community for assistance, in a major test of the group’s ability to react quickly to an unpredicted crisis.

Taliban officials urged the international community to assist areas harmed by the earthquake, and the group’s shadowy leader, Emir Haibatullah Akhundzada, publicly urged international humanitarian organizations to “help the Afghan people affected by this great tragedy and … spare no effort.” “We hope that the International Community & aid agencies will also help our people in this dire situation,” Anas Haqqani, a senior member of the group associated with the powerful Haqqani network, tweeted.

The United Nations (UN) and the European Union quickly offered assistance, with the UN Office for the Coordination of Humanitarian Affairs (UNOCHA) claiming that “inter-agency assessment teams have already been deployed to a number of affected areas.” Ramiz Alakbarov, the UN’s deputy special representative to Afghanistan, also committed the UN’s resources to aiding victims of the disaster, writing on Twitter that “[the] response is on its way.”

The U.S. Geological Survey (USGS) estimated that the earthquake, which took place early Wednesday morning, had been a 5.9 on the Richter scale. Tremors destroyed thousands of houses throughout the affected areas, trapping many Afghans under rubble; efforts to extract them have been complicated by spring rains, creating mud and amplifying the challenge of transporting needed supplies, according to Muhammad Amin Huzaifa, an official within the Taliban’s Information and Culture Department.

Alakbarov also noted that Afghan houses are typically constructed of readily available materials such as stone rather than concrete, increasing their vulnerability to severe weather, and that each dwelling typically contained multiple generations of the same family, increasing the number of people under the same roof.

The affected area’s extreme remoteness has stymied relief efforts. Interior Ministry official Salahuddin Ayubi noted that many of the villages affected by the disaster were in “remote areas in the mountains” and not easily accessible by road, while the Taliban possesses only a handful of airplanes and helicopters. Afghanistan’s existing humanitarian relief efforts have largely been based in provincial capitals, meaning that redeployment to the affected areas, even with the Taliban’s blessing, has taken time and logistical effort.

The death toll from the earthquake is now estimated at 1,000 killed and 1,500 injured. Ayubi speculated that the casualties from the earthquake would increase over time, acknowledging that “it will take some time to collect details” from all of the villages.