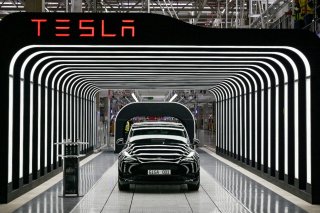 Elon Musk has been in the news in recent weeks for his quest to buy Twitter, but in the meantime, one of the companies he currently leads, Tesla, posted a huge first quarter.

In quarterly earnings released Wednesday, Tesla reported $18.76 billion in revenue and $3.22 in earnings per share. Both, per CNBC, were above analyst expectations. This led to shares jumping 6 percent in after-hours trading.

One headline number, according to CNBC, was that automotive revenue surged 87 percent from the same period the year before.

"The first quarter of 2022 was another record quarter for Tesla by several measures such as revenues, vehicle deliveries, operating profit, and an operating margin of over 19%. Our outstanding recourse debt has fallen below $0.1B at the end of Q1. Public interest in a sustainable future continues to rise, and we remain focused on growing as fast as is reasonably possible."

"Challenges around supply chain have remained persistent, and our team has been navigating through them for over a year. In addition to chip shortages, recent COVID-19 outbreaks have been weighing on our supply chain and factory operations," the company said. "Furthermore, prices of some raw materials have increased multiple-fold in recent months. The inflationary impact on our cost structure has contributed to adjustments in our product pricing, despite a continued focus on reducing our manufacturing costs where possible."

The company had already reported vehicle deliveries of 310,048 in the first quarter, with Model 3 and Model Y comprising about 95 percent of that total.

Musk, on the company's earnings call, also admitted that self-driving plans are taking longer than Tesla had hoped. "With respect to full-self driving, of any technology development I've ever been involved in, I've never really seen more kind of false dawns where it seems like we're going to break through but we don't," the CEO said, according to CNBC.

Analysts also weighed in on the results.

"Taking a step back, with the supply chain issues still a lingering overhang on the auto space and logistical issues globally with China front and center, we believe these "Cinderella-like" numbers and good guidance in a brutal supply chain backdrop speaks to an EV demand trajectory that looks quite robust for Tesla throughout 2022 with a massive 2H ahead," analyst Daniel Ives said in a note to clients after the earnings were released.

Ives went on to say that 1.5 million units delivered this year is "doable," but that that will depend on no further disruptions to the supply chain in China, like the recent one that knocked out capacity for a time.