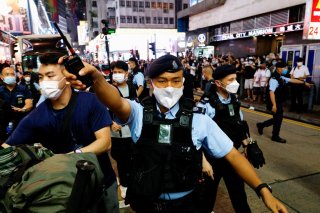 Following a crackdown on vigils commemorating the June 4, 1989, Tiananmen Square incident in Hong Kong, hundreds of Hongkongers traveled to Taiwan, the democratically-governed island regarded by Beijing as a renegade province, over the weekend to participate in vigils marking the thirty-third anniversary of Tiananmen Square.

“When democracy is under threat,” Tsai continued, “it is more necessary to uphold democratic values.” She criticized the authorities of Hong Kong, which has been governed under a controversial national security law since 2020, for attempting to stifle the collective memory of the protests and subsequent violent crackdown by China’s communist government.

In recent years, Hong Kong has increasingly restricted residents’ ability to commemorate the June 4 incident, which is thought to have claimed at least 200 and possibly as many as 10,000 lives. City authorities repeatedly indicated in the run-up to June 4 that they would deny protestors a permit to hold a candlelight vigil in Victoria Park, where remembrances had previously been held every year from 1990 until 2020. Several statues commemorating the incident in Hong Kong have also been removed from public view or destroyed.

In a statement to the Washington Post, Hong Kong’s Catholic diocese also announced that it would not hold its traditional mass commemorating the date, recommending worshippers instead to remain at home.

Hong Kong has seen a sharp decline in political freedoms following the end of yearlong protests from 2019 until the beginning of the COVID-19 pandemic. Following local elections in 2019, in which pro-democracy advocates won a resounding victory, the electoral rules for Hong Kong’s Legislative Council were overhauled, decreasing popular representation and forcing all candidates to take a “loyalty oath” to Beijing before being seated. A subsequent election, described by pro-government media as a “patriots only” election, saw the pro-democracy bloc lose virtually all of its representation in the assembly amid a historic decrease in turnout caused by boycotts of the election.

China’s official history of the Tiananmen Square protests describes it as a period of unrest instigated by “a very small number of anti-communist and anti-socialist elements.” It credits China’s leader at the time, Deng Xiaoping, with taking “decisive measures to quell the counter-revolutionary riots … safeguarding the fundamental interests of the people.” Details about the incident remain heavily censored within the mainland, although information is more widely available in Hong Kong, where the internet is still relatively open.