Time for Pete Buttigieg to Quit 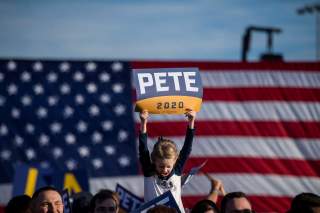 Bernie Sanders’ big victory in the Nevada caucuses has moderate Democrats to panic. That was no close race he eked out, no fractional delegate decided by a coin toss. It is, with 88 percent reported, a 26-point drubbing (approximately the size of Pete Buttigieg’s 2010 state treasury defeat) over runner-up Joe Biden.

Naturally, moderate Democrats who think that a self-proclaimed “socialist” could never win (and who oppose his positions in the first place) are pointing out their great concern and calling for concerned people to get together to stop him.

Noted anti-Trump conservative Max Boot tweeted an anonymous appeal from Third Way calling on the moderate Democrats to “stand up to Bernie or you — and we — all lose.” It reads almost like an abridged version of the National Review’s #AgainstTrump project, with a list of offenses bullet-pointed under various headlines.

Lindy Li, the Biden delegate who resigned from a local Democratic group after Bernie bros attacked her for posting an excerpted video of Bernie’s remarks in Moscow in 1988, tweeted, “Moderate Dems need to consolidate ASAP … Biden, Bloomberg, Klobuchar, and Buttigieg need to figure it out immediately.”

Some of the candidates even made self-serving calls for their opponents to drop out. These got started in earnest before the Nevada debate when Michael Bloomberg’s campaign released a document stating that no other moderate had a path to the nomination.

Most preposterous of all, during and after the debate, Pete Buttigieg called on Mayor Bloomberg to drop out of the race. In his speech celebrating breaking into the top four in Nevada, Pete called Bernie “inflexible” and “ideological.” Just a few days earlier, he had attacked Sen. Klobuchar for being too flexible when it came to voting for Trump’s judicial nominees.

As of this writing, Pete is in third place in Nevada with 14 percent of the vote and fourth place in South Carolina polls and fifth in national polls. Early in the night, Pete shared “internal numbers” with the press claiming to have him at second in Nevada. (He is on track to undershoot his internal numbers by six points.) Then he went on a dozens-of-tweets rant about his “national movement.” He offered this twenty-first-century white suburban man’s version of Confucian wisdom: “If we can light up a high school gym—we can light a neighborhood. If we can light up a neighborhood—we can light a city. If we can…”

I think you know where he’s going with that, so I won’t bore you.

It’s hard to say Pete sounds like a parody of himself, because that’s what he really sounds like. But what Pete says sounds like what the left-wing trash-talking podcasters of Chapo Trap House say when they are trying to parody Pete.

This kind of attempting to claim victory before the results are in is just one more example of the kind of arrogance that turns voters and Democratic leaders off to Pete. It is reminiscent of when, on the night of the Iowa caucuses, when 0 percent of the vote was in, he took to the stage to say his campaign had surprised the nation. Now the fact that he would pitch himself as the unifier of the mainstream moderates is as grating. Not only is he one of the moderates with the worst chance of winning the nomination, he also performs worst against Trump in general elections polls compared to Biden, Bloomberg, and Sanders, and no better than Warren or Klobuchar.

This isn’t a high school poetry contest, anymore. Pete hates it when people point out his lack of experience. “You might not think much of my small town…” But why stop there? Pete should drop out and clear the way for neighborhood Homeowners Association President Tom Ratherly to win the nomination. I mean, he doesn’t look down on the hard work that HOAs do maintaining property values, does he?

A candidate who was really as concerned about defeating Sanders as Pete claims he is might think about dropping out and endorsing someone more electable with a broader and more diverse base than he (i.e. Biden). But, if I were to drop an Amy-style joke, being that some of the voting took place in Vegas, let’s just say I wouldn’t bet on Pete’s sincerity or humility. As is, Amy might stick around for a little bit longer, as her chances aren’t much slimmer than Pete’s, and why would she want to drop out before him?

What that means for South Carolina is that it looks like it will be a close race. Buttigieg and Klobuchar combine for 18 percent of the vote in the Real Clear Politics poll average. A lot of it (but not all of it, maybe not even a majority of it) would go to Biden. The presence of Steyer (who decided to spend a fortune just to compete for runner-up status in South Carolina?) at 16 percent of the vote is a bigger problem for Biden. If Biden does pull out a win, it won’t be a landslide. (Steyer spent $74 million on seven Senate and gubernatorial races in 2014 and won three of them, so that shows how politically smart he is with his money.)

Next, the Democrats move on to Super Tuesday, where Bloomberg appears on the ballot for the first time. Sanders leads in most of the key races for which there is sufficient poll data, with Biden and Bloomberg, not Buttigieg, in the second and third spots (in varying orders). If Biden loses a few close races—and if the “moderate” vs “socialist” lanes theory of the primary is true—then Pete would be to blame.

Minnesota is also up for grabs on Super Tuesday, and Klobuchar currently leads Sanders by 6, so, again, if the main goal is to deny Sanders the nomination, then Buttigieg and his 6 points there could be important.

But even if Bloomberg, Biden, and Amy were to drop out today, that would not help Pete consolidate the votes. Nope, Bernie would begin to run away with it.

Biden voters would flock to the next best white-haired working-class man of the people. Biden grew up in Scranton, Pennsylvania and attended the University of Delaware. He was not the son of two university professors.

Amy voter would prefer the intellectual, experienced woman who was endorsed alongside Amy in the New York Times to a smug, condescending man who made off-putting attacks on their candidate.

Bloomberg won’t drop out, so that’s a moot point. But a lot of his voters are coming into the primary because he offers a refreshing alternative to ordinary Democrats. Because he’s capable of managing a city 86 times the size of Pete’s city and capable, not just of reducing overhead by playing with numbers on a spreadsheet, but also of building an international business.

The above predictions are largely backed up by poll data. Morning Consult’s poll of second-choice preference in December found that Sanders was the plurality choice of Biden voters, followed by Warren. Buttigieg won more Warren voters than he did Bloomberg voters. In fact, a recent Yahoo-YouGov poll found that Sanders beats all of his Democratic opponents in head-to-head matchups.

That might be surprising to professional political pundits and activists, who spend all their time following politics and thus understand the differences between Medicare For All, Transition to Medicare For All, Medicare For All Who Want It, and Obamacare For All. Including some of the same people who tried to alert Republican voters that Trump used to support gun control. But most people don’t pay such close attention to politics and don’t know or care.

Moderate strategists bellyaching about other moderates staying in the race have the wrong understanding of the race. Their strategy to whine about it is at best useless and maybe even self-defeating.