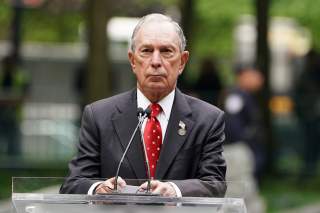 John Connally, the brash Texas politician from an earlier era, became something of a laughing stock in 1980 for spending $11 million, a tidy sum in those days, in an effort to capture the Republican presidential nomination--and getting for his lavish expenditures exactly one convention delegate. She was Ada Mills of Clarksville, Arkansas, and she became known as the $11 million delegate.

Based on that kind of spending per delegate, and adjusted for inflation, Michael Bloomberg should have by now 19 convention votes. But of course, he has none, and his political strategy was predicated on the assumption that at this point, even after spending some millions of dollars, he wouldn’t have any because he wouldn’t be competing yet for those early delegates.

It’s difficult to see how the billionaire Bloomberg, a serious hombre for decades in the worlds of business and New York politics, can avoid becoming a laughing stock himself after his foray into the crucible of presidential competition. Sure, anyone worth some $63.7 billion, as Bloomberg reputedly is, can afford to spend whatever he wants to get to the White House. But is it smart? Even Connally had enough sense to spend other peoples’ money in his delegate search.

So let’s survey Bloomberg’s miscalculations as he thrust himself forward as the man who can capture the national imagination and expel Donald Trump from the presidency.

First, he didn’t adequately calculate the political dynamics of presidential nomination battles in our time. Every four years there is talk of a possible brokered convention based on no candidate getting the required majority of delegates when the opening gavel comes down. And every time the convention opens with the winner clearly known. The reason is the dynamic of momentum. An early win generates interest and excitement, which propels the winner forward in subsequent contests.

By the time Bloomberg actually enters the fray, on Super Tuesday, March 3, this dynamic of momentum will have begun to pick up steam, with the result that it will be difficult for any latecomer to catch up. It won’t be impossible, of course, and we don’t know yet just how this Democratic free-for-all will unfold. But it appears that Vermont Senator Bernie Sanders has begun to capture the crucial momentum that comes to frontrunners, and the excitement his campaign is generating will be difficult to overcome.

Second, he didn’t enter the contest with any compelling message that crystallizes where the country is today and where he would take it as president. His ubiquitous television commercials emphasize his aim of evicting the very bad President Trump from the White House. That’s fine as far as it goes, but it’s inadequate. Voters want candidates who see the temper of the times as they themselves see it. If you don’t put forward any narrative that demonstrates an overarching vision of America and its future, you can’t resonate.

Third, Bloomberg has shown no awareness of the fundamental political reality of our time--namely, the disintegration of the status quo, both in terms of the American political structure and the global structure. As I wrote recently in this space, Americans can see that the old ways aren’t working and something new and very different is needed. They want a leader capable of guiding the nation in new directions.

That’s why the two most compelling politicians on the American scene today are Donald Trump and Bernie Sanders, both enemies of the old order with comprehensive critiques of the status quo and bold visions for taking America into a new era. Bloomberg is a product of the Old Order; he thinks in Old Order terms; he doesn’t seem cognizant of its impending doom.

Fourth, Bloomberg doesn’t even have enough conviction to parry the anticapitalist zealotry that is emerging in his party, as he demonstrated at the last debate when he was attacked viciously for his soaring success. NBC’s slight-minded Chuck Todd, a debate moderator, piled on after Sanders’ attack-dog aggressiveness by asking Bloomberg, “Have you earned too much money? Has it been an obscene amount of money?” Demonstrating his own obscene style of TV pugilism, he opened his attack by challenging the candidate, “Should you exist?”

What an opportunity! Bloomberg could have taken flight with the romance of the entrepreneurial challenge--how he had no idea when he started his business whether he could make it go, whether he would lose his shirt in the effort, how he devised and refined an information concept that turned out to have great value in the marketplace, how he revolutionized decision making in the financial sector, how he created 20,000 jobs and helped untold thousands of Americans gain the resources over the years to get married, buy homes, have children, and more.

Instead, he waxed lame. Asked if he deserved his billions, all he could say was, “Yes. I worked very hard for it. And I’m giving it away.” He said he had been “very lucky,” thus playing into the hands of Bernie Sanders and likeminded socialist zealots. If it was just luck, what the heck, why not let the government redistribute it?

Bloomberg has taken a beating over his debate performance for not being particularly articulate or combative. But the real problem was the message, which was wan, insipid, derivative of what all the others were already saying, and devoid of any vision or verve. Maybe a candidate can emerge as a force by coming in late even in the momentum politics of today’s nomination battles, but no candidate can come in late like that and hope to succeed.

So let’s apply the Connally test -- what he’s going to pay on a per-delegate basis. The answer is likely to be stunning--and worthy of some mirth.

Bloomberg Spends $10 Million for One Week in TV Ad Spree