Trump Is Smiling: 5 of the 8 Democrats Running for the Nomination Need Money 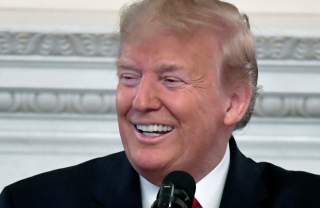 The latest disclosures from the Federal Election Commission reveal the current financial strength of the Democratic field, or rather their weakness. All but three of the eight candidates are increasingly strapped for cash as they enter Super Tuesday and the big leg of the campaign.

The candidates not in crisis are Senator Bernie Sanders of Vermont, and the two billionaires in the race, Tom Steyer and former New York City Mayor Michael Bloomberg.

Sanders, whose two presidential campaigns have been built around the messaging that he’s leading “a revolution,” has been able to finance a national campaign through grassroots fundraising and small dollar donations. He began the month of February with $16.8 million on hand, far ahead of most of the competition.

The only candidates surpassing the democratic socialist are the two self-funding billionaires. Steyer, who has collected hundreds of thousands of individual donations from supporters, edged out Sanders by starting the month off with $17.8 million. This money did not transfer to popular support, as Steyer was excluded from the recent debate, although he hopes for a strong showing in the South Carolina primary next week.

Michael Bloomberg, who was included in the debate for the first time, began the month with $55.1 million cash on hand, all of it his own. The candidate, who only joined the race in November, has sworn off outside fundraising. In only a few months, Bloomberg has spent more than $460 million of his own money on his candidacy.

Outside the top three, there’s a large drop-off. Former Vice President Joe Biden, who even when he was the frontrunner for all of last year was unable to reach the fundraising levels of his competitors, started the month with $7.1 million. Like Steyer, Biden is hoping for a hail Mary finish in the Palmetto state.

Next is Pete Buttigieg, the former Mayor of South Bend, Indiana, who three weeks ago had $6.6 million on hand. Buttigieg consistently had some of the largest fundraising pulls of 2019 and had strong showings in both the contested Iowa caucus and the New Hampshire primary. But approaching Super Tuesday, when his national polls still hover at 10%, it’s becoming difficult to see a straightforward pathway to the nomination. This led to a frantic plea to supporters for donations.

Following another drop off is Amy Klobuchar, Senator from Minnesota. The Midwestern moderate had $2.8 million in the bank, which was boosted after coming in a surprise third in New Hampshire. Klobuchar hopes to make the money last by investing it in smaller primaries on Super Tuesday.

The major campaign most in trouble at the start of February was that of Massachusetts Senator Elizabeth Warren. She began with only $2.3 million, which forced her out of desperation to take out a $3 million loan in January. According to the FEC, she only accessed $400,000 of it. Despite solid fundraising numbers from last year, this situation was created through overspending. In January the senator spent $2 for every $1 she received.

Warren’s financial status got a second chance at life, however, following her skewering of Michael Bloomberg at the Democratic debate in Nevada. In the twenty-four hours following her performance, Warren amassed over $5 million in donations from across the country. For comparison, Bernie Sanders received $2.7 million in the same timeframe.

Rep. Tulsi Gabbard of Hawaii, who has been excluded from the debate stage since December, is still running a quixotic antiwar campaign for the nomination. She began February with the least amount of money, $2 million.